HBCU climate scientists get a $1M boost from the NSF 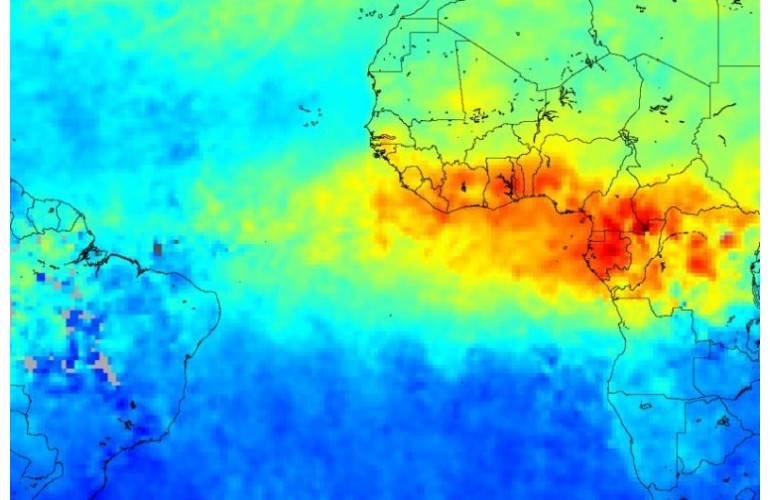 North Carolina A&T University researchers were awarded a million dollar grant on September 1, 2018, to improve understanding of biomass burning and investigate the impact that particles have on cloud formation.

The National Science Foundation-funded project will focus on the burning of forests, grasslands and agricultural crops in Africa, probe the light-absorbing properties of particles in the emissions, and what happens when the particles come in contact with mineral dust from the Sahara.

The archive photo from the Earth Observatory at NASA Goddard Space Flight Center shows how fires in the savanna south of the Sahara Desert, and in the tropical rainforests at latitudes just north of the equator, form an intense swath of biomass burning across the African continent from December through April each year.

According to NASA, the majority of these fires are not wildfires but result from agricultural waste burning associated with subsistence farming.  The fires produce large amounts of carbon monoxide, which is a good indicator of atmospheric pollution.

“Because of this grant’s emphasis on research excellence at HBCUs, this project will directly increase the number of minority students trained in atmospheric science both in field and laboratory research,” said N.C. A&T professor Solomon Bililign and principal research investigator.

The project will enhance the atmospheric chemistry and physics research and training capacity at two Historically Black Colleges and Universities (HBCUs), North Carolina A&T and Howard University – two of only four HBCUs with a program in Atmospheric Sciences.

Bililign and his team of undergraduate and graduate researchers will collaborate with Howard and Colorado State universities on field research, modeling of health impacts, and collect filter samples on aboard maritime research platforms on National Oceanic and Atmospheric Administration (NOAA) ships on the Atlantic Ocean.

NOAA operates a wide assortment of hydrographic survey, oceanographic research and fisheries survey ships located in the Atlantic. The ship’s officers and crew provide mission support and assistance to scientists from various NOAA laboratories as well as the academic community.

The “HBCU-Excellence in Research: Radiative Effects of Biomass Burning Aerosols Laboratory and Field Measurements and Modeling of Climate and Health Impacts” will enable underrepresented minorities in the field of atmospheric science to participate in large field measurement activities, develop collaboration with Colorado State University, a leading atmospheric science institution, and to work on aircraft based measurement systems.

“Household pollution from biomass burning contributes to nearly three million premature deaths per year,” Bililign said. “Having a better understanding of what the health impacts of pollution due to biomass burning should help improve household burning conditions in the developing world.”