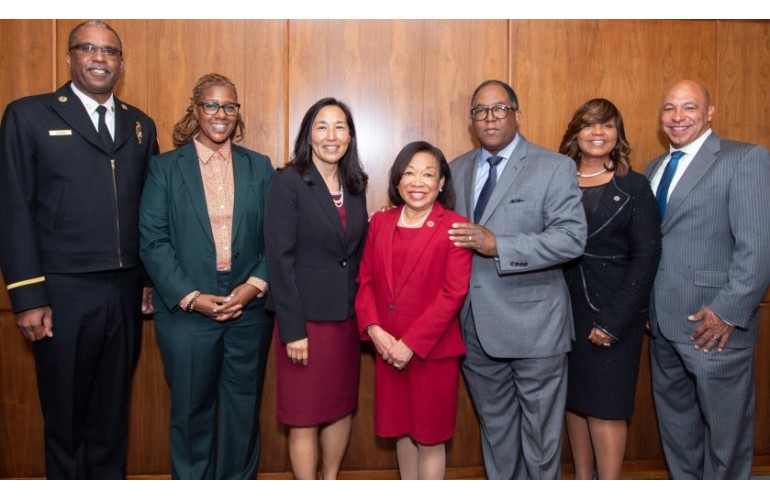 Tuskegee University announced last week that it had received a $20 million gift from MacKenzie Scott, a renowned philanthropist, activist and author. In a statement, President Lily D. McNair said the donation will help Tuskegee build on its reputation as one of the nation’s leading institutions of higher education.

In the October 2019 photo, Dr.  McNair  (center) is flanked by several officials marking the designation of Tuskegee University as the only historically Black college and university (HBCU) selected as a location for the Center for Bioethics in Research and Health Care.

“This gift comes at an opportune time for us,” said McNair last week. “We are about to launch a five-year strategic planning effort and, with this investment from Ms. Scott, we will be able to unfold the next phase of our mission in ways we simply could not have considered before.”

“We will focus on student scholarships, faculty and curriculum development, interdisciplinary programs, and campus infrastructure improvements,” she said in a statement. “The gift will allow us to become the Tuskegee of the 21st century – a university that integrates knowledge, leadership and service to solve the problems of a global, modern society.”

President Wayne A. I. Frederick in a statement said Howard University will “plan to immediately put this eight-figure gift to good use to support components of our 5-year strategic plan to help students graduate on time, retain our talented faculty, enhance our campus infrastructure and support academic innovation and entrepreneurship.”

Hampton University President Dr. William R. Harvey in a separate statement said “the entire Hampton University community (is) grateful to Ms. MacKenzie Scott, who has chosen to support us during this unprecedented period of uncertainty.”

“These significant new resources will enable Spelman to continue to graduate Black women with a competitive edge to become successful global leaders and social justice change agents in whatever they choose as their life’s work. We are so very grateful,” said Mary Schmidt Campbell, Ph.D., president of Spelman.

Xavier University said that the gift is “the largest donation in its 95 years of excellence.”

“MacKenzie Scott’s beneficent gift to Morehouse and several of our companion institutions in the HBCU network is an investment into the future of Black excellence,” said David A. Thomas, the president of Morehouse College.