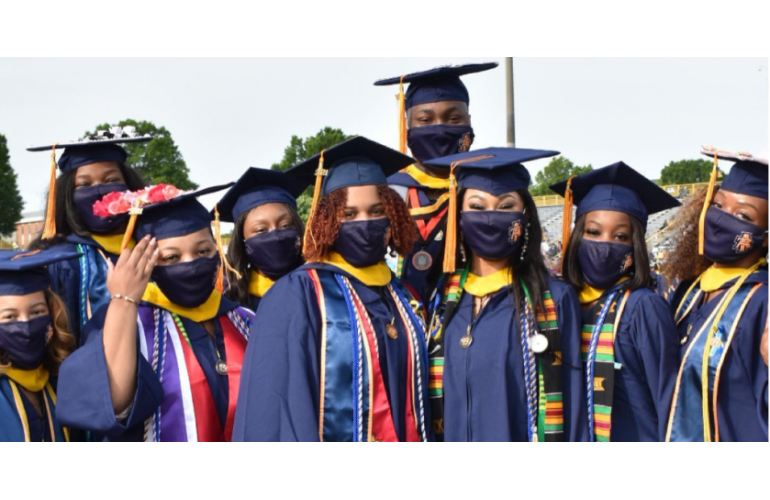 North Carolina A&T State University had its largest graduating class in history last week. The school reported that 2,400 students applied to graduate this academic year, including about 1,600 this spring. Each ceremony was live-streamed for those who could not attend in person.

N. C. A&T’s two commencement ceremonies honored spring 2021 graduates and alumni who graduated in 2020 but were not celebrated in person because of COVID-19. Click here to read more or watch the highlights on YouTube.

Florida A&M University held four in-person commencement ceremonies from April 23 through April 25. Click here for excerpts from the keynote address given by the Secretary of Defense Lloyd J. Austin III.

Alabama A&M University held its spring Commencement Ceremony on April 30. Family members, friends, and members of the AAMU community who were unable to attend viewed the event online. Watch on YouTube.

The University of the District of Columbia held its Commencement Convocation on May 8th. Hampton University alum Rashida Jones ’02, president of MSNBC, served as the university’s 150th and 151st Commencement speaker on May 9. Commencement was held virtually.

Jackson State University’s Commencement was also held May 8th in the Mississippi Veterans Memorial Stadium. All ceremonies were live-streamed and were also broadcasted on Facebook on the JSUTv page.

Bakari Sellers, currently a political analyst on CNN, will be the commencement speaker at Southern University and A&M College’s spring commencement on May 14. Click here to view. Last May, Sellers released an autobiography, My Vanishing Country, that centers on the forgotten lives of Black working-class people in the rural U.S. South.

The University of Maryland Eastern Shore will also hold a Recognition Ceremony in celebration of its graduating classes on May 14. Click here to watch the graduation celebration.

Prairie View A&M University’s spring 2021 candidates for graduation include 222 engineers, according to PVAMU.  Michael Eric Dyson, Vanderbilt University professor, and author, will be the commencement speaker at the Spring Commencement Convocation on May 15.

Norfolk State University will also hold commencement ceremonies on Saturday, May 15. The event will feature NSU Board of Visitors Rector Joan Wilmer. She is a 1999 Norfolk State graduate and is the first woman to serve as the university’s rector since 1998.

Virginia State University will celebrate its Spring 2021 Commencement on Sunday, May 23 at Rogers Stadium.

Tuskegee University has announced that Bakari Sellers will serve as the keynote speaker for the Spring Commencement exercises to be held Sunday, May 30.