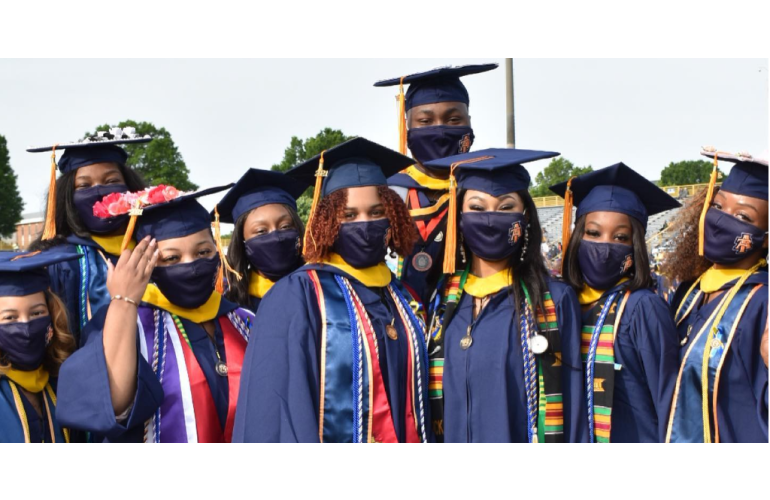 Historically Black Colleges and Universities (HBCUs) comprise only three percent of American colleges and universities, yet produce almost 20% of all Black graduates. According to Dr. Michael L. Lomax, HBCUs still matter because they play an even greater role when it comes to students pursuing degrees and careers in science, technology, engineering, and math (STEM) fields.

Ahead of Southern University and A&M College’s spring commencement, faculty, staff, and candidates for graduation held a grand rehearsal in the F.G. Clark Activity Center. On Twitter, the official channel of SUBR retweeted celebratory tweets.

One student shared that she was graduating with a degree in finance and a 3.92 GPA. Another Louisiana native majored in marketing with a concentration in the supply chain. The third-generation HBCU graduate is also a second-generation Southern University and A&M alumna. “I’ll be bringing in the 9th degree from SouthernUniversity to my family,” she added.

Blair Blackledge majored in mechanical engineering. Post-graduation he hopes to work for Boeing or Entergy. “My experience at Southern University has been a huge success,” he said. “As a transfer student, I was welcomed with open arms.”

I plan to start my career working at either Boeing or Entergy.
My experience at #SouthernUniversity has been a huge success. As a transfer student, I was welcomed with open arms. #WeAreSouthern pic.twitter.com/4AHvCdaXFv

Prairie View A&M University will award nearly 1,000 degrees to its spring graduates this Saturday, May 14, 2022, at Panther Stadium, the HBCU announced Wednesday. The Roy G. Perry College of Engineering will award more than 190 degrees. One story of interest posted on the PVAMU website highlights Jeremy Daniels, one of the first cohorts of Hewlett Packard Enterprise Houston’s HBCU Cyber Security students.

According to PVAMU, Daniels won 2nd place in the “Best in Class: Technical Division” competition, a first for both the HBCU Initiative team and the entire global security organization. He is slated to begin his dream career as a cyber threat intelligence analyst with Hewlett Packard Enterprise.

North Carolina Agricultural and Technical (A&T) State University has announced that more than 1,900 students have applied for graduation, representing a 13 percent increase over the past year, and totaling more than 3,000 for the 2021-22 academic year.

According to N.C. A&T, one ceremony will be held for undergraduate and graduate students on Saturday, May 14, at 8:30 a.m. in person at Greensboro Coliseum. Emmy Award-winning journalist and co-host of ABC’s “The View,” Sunny Hostin, is the keynote speaker.