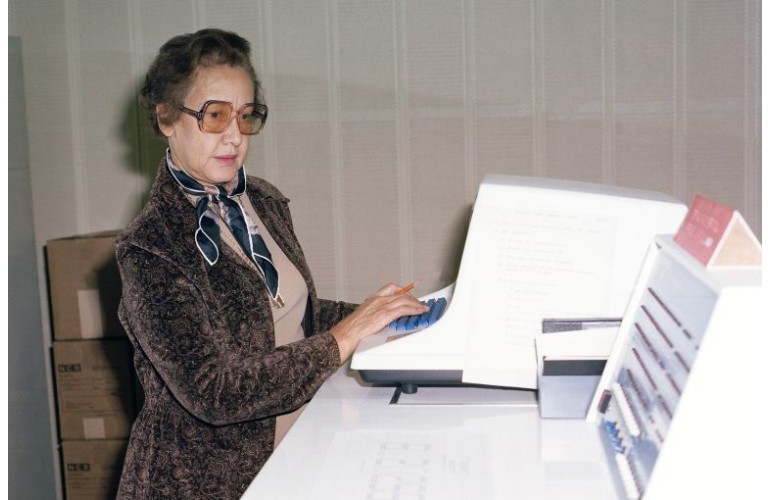 This article about Katherine Johnson was first published in US Black Engineer and Information Technology magazine, April 1997.

HAMPTON, Va. — It was July 1969, and Katherine Johnson and hundreds of others were at a sorority convention in Pennsylvania’s Poconos. The festivities came to a halt — with millions around the world — when the hushed assembly gathered around a TV.

Astronaut Neil Armstrong was about to take a giant leap for humankind with his historic first step on the Moon, and Johnson held her breath.

Few at the convention knew Johnson had played a critical role in this Moon mission. A research mathematician at NASA’s Langley Research Center, Johnson had calculated the trajectory to get Apollo 11 to the Moon.

Now retired, Johnson, 78, spent 33 years at NASA, beginning before America’s first manned space flight — Mercury astronaut Alan B. Shepard’s suborbital trip in May 1961 — and ending with the planning of the Space Shuttle. She calculated the flight paths of Shepard; John Glenn, the first American to orbit the Earth in 1962; and scores of others.

Her career spanned the civil rights decades when great debate occasioned the opening of new areas to Blacks. Johnson, who herself had integrated a major university, opened other doors in her pioneering work at NASA but kept quiet about her own achievements.
“To me, it was a part of my job,” she says. “What was important was getting the job done, and I loved every minute of it.”

But there is more. When Johnson started with the National Advisory Committee for Aeronautics (NACA) in June 1953, there were few women, fewer African Americans, and no computers. All of her calculations were done by hand.

“It was a time when computers wore skirts,” she recalls. But it was a challenge Johnson loved.

“You do it all with algebraic equations — thousands and thousands of equations,” she says. “It was totally exciting. I could work on it until I was blue in the face.”

NACA had a racially segregated pool of women to do math calculations when Johnson started. She was “borrowed” by the flight research branch, whose male heads were so impressed “they forgot to return me to the pool.”

Both her mother and her father, a farmer with a 6th-grade education, put a premium on education. White Sulphur Springs had public schools only to the eighth grade for Blacks, so Johnson’s father moved the family 125 miles to Institute, so his four children could attend West Virginia State College and its laboratory high school.

The family rented a house each September, Johnson says, and everyone worked in addition to studying. Her father stayed in White Sulphur Springs, where he was a janitor at the famous Greenbriar resort. He also cleaned several churches, the local community center, and the local stock exchange to support his children’s education.

She married, started a family and began graduate school in mathematics at West Virginia University. She was one of the first Blacks to integrate the graduate school that summer of 1940.

After a move to Hampton, Johnson applied for the NACA job. That agency, supercharged after JFK’s decision to outrace the Soviet Union to the Moon, later became NASA, and Johnson’s flight-research branch became the nucleus of the space program.

“Everything we did was secret,” Johnson says. NACA was chartered only for aeronautics, and this forced her work on space travel to be conducted clandestinely.

“We had to educate ourselves because there were no textbooks. So we wrote the first textbook (on space) — everyone in the office, including me.”

Calculating trajectories, she says, was “just like working a jigsaw puzzle. I’d ask (another section at NASA), ‘Where do you want (the astronauts) to come down?’ And they’d tell me the spot and I’d work backward from there.”

Shepard’s flight was easy, she says because it was “just a matter of shooting him up and having him come back down in the water.”

But as the program progressed, the calculations became more and more complex.
On Moon shots, each flight path had to take into account that the Earth is rotating on its axis as it moves around the Sun. And the Moon, also spinning, is circling the Earth.

Johnson’s equations had to get a capsule away from the Earth and into space for an orbit around the Moon. The lander then was shot from the orbiting capsule to a certain point on the surface. Then the lunar lander had to be fired into a rendezvous with the orbiting capsule. The capsule then had a new path to return to Earth.

Assertive, by the Numbers

Johnson, who described herself as “assertive, but not militant” in the male-dominated NASA, also developed backup navigational charts. Using constellations as a road map, she plotted by hand which stars the astronauts should see from a tiny window.

“That way, if their systems failed, they’d know if they were still on course,” Johnson says.