How Minority-Serving Institutions are Promoting STEM 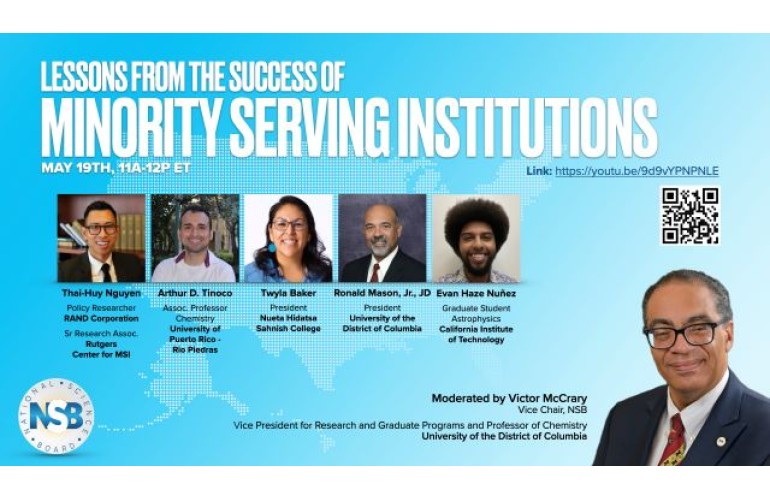 The panelists included Ronald Mason, president of the University of the District of Columbia, and Evan Nuñez, astrophysics graduate student, California Institute of Technology, graduate of El Camino College and Cal State Polytechnic University-Pomona, and NSF Graduate Research Fellow.  Watch on YouTube. Read excerpts from the online discussion below.

“MSIs are a growing sector of American higher education. They are four-year and two-year institutions that have been given racialized designations. I consider them the future of American higher education because this country will become a majority-minority. As more people of color are enrolling in higher education, they are changing the face of our colleges and universities. MSIs collectively educate about 30 percent of all undergraduate students and 40 percent of students of color despite representing only 15 percent of all American colleges and universities. As we think about granting access and success in STEM education, MSIs certainly play a role in that. Every year, the NSF (National Science Foundation) provides a listing of the best schools that do a wonderful job of awarding STEM degrees to minority students, and many MSIs make up the bulk of those rankings. There is a slew of MSIs that are focused on supporting racial groups. These institutions, despite their designations, do a great job of keeping a variety of students.

Native American Non-Tribal Institutions are also enrollment driven. There are Predominantly Black Institutions and Tribal Colleges, which are mainly two-year colleges driven by enrollment and self-determination.

“To understand their success, you have to understand the history. We do not have a great record of supporting those institutions. Often these colleges and universities are under-resourced. They have a long history, documented by case studies, demonstrating that MSIs are adaptive and innovative. They tend to do a great deal with a lot fewer resources.  Imagine what they can do if they were just given a bit more support. What contributes to their ongoing, contemporary success in STEM is that MSIs are at the forefront of advancing racial equity in STEM education. Why?

“In my work, I would suggest that MSIs are leaders because when organizations are given these identities and designations, they have an anchor that allows them to guide their work to better support their students.  By adopting these designations, institutions push back against dominant cultural norms. They push back against what they believe are the standards for STEM achievement. They push against those assumptions to ensure that more students are allowed opportunities. They promote inclusive training and pedagogy. Again, they deviate from these dominant understandings of how we teach students and train future scientists. They recruit faculty and researchers of color committed to advancing the sciences and are genuinely committed to ensuring that students just like them can succeed in this space. A lot of scholarships from MSIs demonstrate faculty commitment not just to research but to student development. Asian American and Native American Pacific Islander-serving Institutions enroll nearly 40 percent of Asian American and Pacific Islander (AAPI) students and undergraduates.

“Interestingly, a little over half of Asian American and Native American Pacific Islander-serving Institutions are community colleges. Not four-year schools. Not research-intensive institutions. And the reason why these institutions are so special is that AAPI students struggle with the perceptions that people have about their success. There is something called “the model minority” that assumes that all AAPI students are universally successful, and that is not true. These institutions adopt the understanding of serving AAPI students and understand there’s significant diversity across ethnic groups. They try to overcome these dominant understandings of AAPI students to truly help students who are diverse in income, ethnicity, language, immigration status, and first-generation status. Much of my work shows how Asian American and Native American Pacific Islander-serving Institutions have become a great source to promote success in science for AAPI students.”

By 2045, America will be a majority-minority nation, so the impact of these institutions is only going to grow. There is a concerted effort for inclusivity.

“Two things I want to emphasize are inclusivity and sustainability. I grew up in the Harlem-New York City area in a predominantly African American neighborhood. There were also Latinos there. This was the late 1980s/90s, so you can say I have always grown up in a minority-serving school system. Schools were severely underfunded, but what stood out for us was the tireless teaching effort, enabling us to think beyond our limits and be resourceful. They let us know that we were just as capable and just as smart as those rich kids. As I began to venture into non-minority-serving institutions, that impression to achieve what I wanted was ingrained.

“Now, as a professor in a Hispanic-serving Institution, I see that same message. That same vision being communicated, and it is supremely empowering. HSIs have existed for a very long time, and Congress recognized them in 1992 and allowed specific funds for them. But each year, the funding fluctuates. HSIs enroll nearly two-thirds of all Latinos in post-secondary education, 40 percent of all bachelor’s degrees, and 60 percent of all associate degrees. They are extremely valuable. There is a particular targeting of nontraditional students. They are older adult learners who have delayed their education for various reasons, low-income students, first-generation college-goers, non-native English speakers, immigrant students, and those who are bouncing work and family. These students have been receptive because they see education as a worthy investment.

“HSIs include a primarily nontraditional body. But creating spaces is no longer enough. According to a 2021 report from the Pew Research Center, the Latino gap in the STEM workforce has not narrowed in recent years. Latinos make up 8 percent of all STEM workers, despite constituting (a more significant) percent of the employment sector. HSIs work even harder to create support systems: community efforts with high schools and nonprofit organizations, enrichment courses, efforts to integrate families to make them more knowledgeable. In addition, there are cultural competency workshops: initiatives focused on financial aid, scholarships, guidance counseling, and job fairs; developing skillsets to transition to the workforce, mentoring, integrating undergraduate students into the laboratory environment, entrepreneurship, and overcoming professional roadblocks—great impetus on perseverance.”

“My name is Woman of Knowledge in Hidatsa. My English name is Dr. Twyla Baker. We are a small institution. We serve a smaller student body, primarily Native American students, and we received the classification of Tribal College. We are the youngest institutions of higher education in the United States, serving its oldest people. We have a tradition of resilience. However, resiliency is a blessing and a curse by how we have had to become resilient.  We are a tribally chartered college. We fall under the guidelines of higher education institutions, learning commissions, and accreditation, and we follow all the same rules. However, we have a different approach to things.

“As a president of my institution and the first president who is younger than the institution itself, what serves our success and our community is that our culture, languages, and who we are as a people ties into the institution’s fabric. It is part of what we do, central to what we do. The direct response to the lack of service that we received from mainstream institutions. It was only a few generations ago that the tribal college movement happened within my parents’ lifetime. Th(is) iteration of tribal colleges has had only four or five decades to catch up to mainstream institutions. However, the past years have put everything on lightspeed. As a tribal college president, I feel we have responded tremendously.

“A lot of what happens at tribal colleges is centered around STEM; it is centered around research. A lot of that has to do with reconciling our histories, narratives, understanding, and knowledge bodies with mainstream knowledge bodies and helping mainstream science practitioners understand that what we were doing and have been doing since time immemorial is science. It is evidence-based observation over generations. And we also take this opportunity to help our students to understand that what they know of the world, their world view, their understanding is incredibly valid, crucial to all scientists everywhere. Why leave a portion of your library untouched? As a researcher, you will not serve your understanding if you are not inclusive of that knowledge body. Therefore, we are working on how that cultural portion meshes and helps our students succeed. I am an alum of this institution, so I have come full circle. I am one of the Tribal College presidents with a STEM degree. We tie our culture into our mission and our sponsored programs, grants, and funding (are proof of success). But there are not enough hands to do the work. Tribal colleges engage not just our students; we are tied into the fabric because we tend to be on tribal lands that are very rural.”