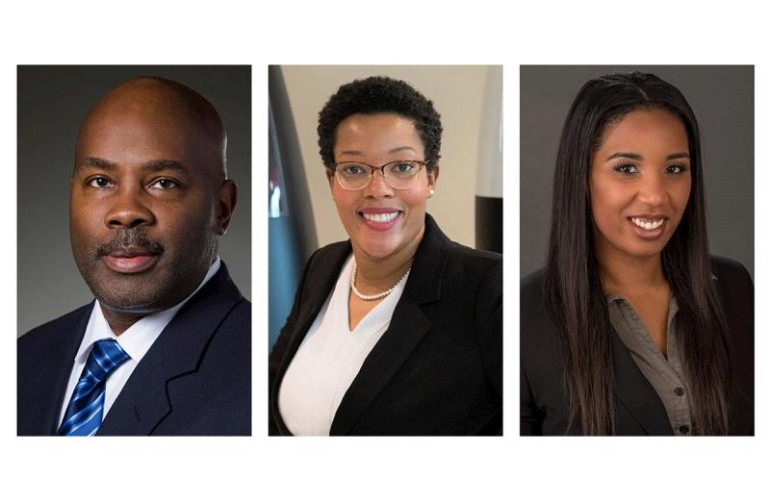 Raytheon Technologies, a sponsor of the BEYA conference, is celebrating 31 engineers recognized at various events during the all-digital Black Engineer of the Year Awards.

“It was an honor to join the BEYA (Black Engineer of the Year) STEM Conference annual Stars and Stripes event celebrating the Black women and men who keep our nation safe, strong, and free through military service and sacrifice,” wrote Gregory Hayes, CEO of Raytheon Technologies on LinkedIn. “This event occurred at a time unlike any in our history. The global pandemic, the plight of racial and social injustice, and political discord have tested us in unprecedented ways. The message is clear: We need diverse innovators and problem solvers, now more than ever. Congratulations to this year’s honorees, including 31 Raytheon Technologies employees.”

Veonicca Wesley (center) is a principal systems engineer for Raytheon Missiles & Defense (RMD), a business unit of Raytheon Technologies, where she serves as an integrated product team lead and system design and architecture manager. Her passion for serving the warfighter grew after completing two consecutive internships with Raytheon. She has held a full-time position with RMD for over a decade.

Wesley also serves as Auburn University’s campus manager for RMD, where she builds a corporate relationship with the university, increases campus presence, and recruits the next generation of engineers. In addition, she leads MathMovesU workshops, volunteering at local high schools by sitting on career and STEM panels and supporting engineering workshops. She always finds time to return to the school system she attended, Birmingham City Schools, to do motivational speaking, assist with robotics and STEM activities, and mentoring college students at Tuskegee University majoring in STEM.

“Veonicca is an exceptional leader in the specialization of complex weapons systems development, production, and deployment. Even more, she has dedicated a significant amount of her time and energy to helping others to achieve their own success,” said Laura McGill, deputy vice president of engineering, Raytheon Missiles & Defense.

“Keith has earned the trust of fellow employees and customers due to his technical reputation and leadership and character traits. I find him to be an exceptional engineer, leader, and most importantly a person of the highest integrity,” said Carlos Peralta, also an Engineering Fellow at Raytheon.

Brittany Wheeler, D. Eng, (right) a work transfer manager at Collins Aerospace, thanked the Alpha Kappa Alpha Sorority Mu Lamba Omega (MLO) chapter for highlighting her award. “Thank you #MLO for highlighting my award,” Dr. Wheeler wrote on LinkedIn. “It’s a privilege to be a part of such (an) ‘AKAmazing’ sorority.”

Dr. Wheeler has over 8 years’ experience in manufacturing Her background is in the aerospace industry working for Collins Aerospace in Chula Vista, California. A visible driver of diversity and inclusion initiatives, Dr. Wheeler created one of the facility’s first employee resource groups (ERGs) at the aerospace parts and components manufacturer.

The Diversity Council had a mission of providing a supportive environment for developing diversity initiatives and a goal of promoting a culture in which every employee respects, appreciates, and values individual differences. Currently, she advises the United Technologies Corp. (UTC) Aerospace System African American Forum along with several other ERGs.

She has attended the NSBE Convention as an ambassador for aerostructures, where she helped recruit several NSBE members and acted as host for an NSBE Superday at the Chula Vista site. She was elected as the chair of the African American Enterprise Board, a newly developed Collins Aerospace initiative, in 2019.

“I am sure there are few people who can affect workplace inclusion across multiple organizations in as short of a time as Brittany has. I am proud to work with her driving D&I initiatives across the business, and believe her work deserves recognition,” said Andre Powell, vice president of finance operations, Collins Aerospace.