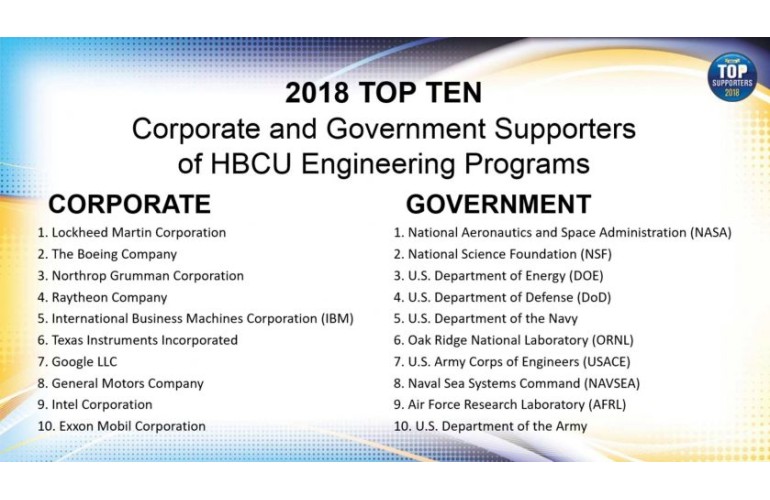 CCG, the Baltimore-based media company that produces the annual BEYA STEM Conference and publishes US Black Engineer magazine, has conducted the top supporters survey for 16 years.

“What matters is the partners that are helping to build America’s pipeline… The Top Supporters of HBCU Engineering list is about companies that help set the table before Thanksgiving,” Taborn said.

Taborn also noted the range of employers in the 2018 survey, from small startups named to the list for the first time to multinationals who have marked 15 consecutive years on the top supporters list.

Taborn also said the survey’s methodology has been simply to ask Historically Black College and University (HBCU) engineering deans which employers give the most support. The deans vote up their supporters and members of the non-profit AMIE are also able to vote. “We then combine those votes to come up with the list,” he said.

In her opening remarks, Veronica Nelson, who has served as executive director of AMIE since last spring, presented her organization’s priorities during the Webinar briefing on the top engineering supporters.

Nelson said AMIE’s purpose is to facilitate partnerships between corporations and government agencies, and one or more of the HBCU engineering schools.

“They are a rich, untapped resource pool of minority engineers,” she said.

‘What HBCUs do for America’s workforce’

Dr. S. Keith Hargrove, who serves as Dean of the College of Engineering at Tennessee State University, spoke on the HBCU Engineering mission to increase the diversity of tomorrow’s technical workforce.

“At Tennessee State University, Lockheed, Boeing, Raytheon, have invested funds in cybersecurity; nanosensors for chemical and biological weapons, and also support our faculty to conduct those type of research within laboratories that we have at our institutions,” Dean Hargrove said. “These partnerships are replicated with other HBCU engineering schools which have similar partnerships based on their research focus, talent, and faculty interest.”

Mr. Oliver “Bo” Leslie, national chairman of the BEYA Alumni HBCU Initiative, said top supporters recognize that it is a win-win for their organizations, the schools, students, and the nation.

“Before my retirement from the corporate world in 2014, I spent a number of years managing a program in a major defense division, with technology transfer and intellectual capital. There was proven track record of cost-effective solutions at HBCU engineering schools,” Leslie said.

“Partnerships play an important role in business. Being a top supporter means having access to bright young students that help diversify the workforce. This is key to our national talent pipeline. ”

Derek McGowan, program manager for diversity at Lockheed Martin, a longtime supporter of the BEYA STEM Conference and AMIE, praised the partnership and said Lockheed’s leadership see it as an “intentional effort” to support HBCU engineering schools.

“We are moving from a relationship to a true partnership that helps develop and invest the talent that we seek,” he said. ‘It’s time for all of us to get involved and engaged. Let’s stop talking about how we can’t find the talent and help develop talent at HBCUs. We have been a corporate partner for years and we are seeing a banner year of recruitment.”

Hello,
I am very interested in learning more about how my company can become a partner and supporter of BEYA and AMIE. ThinkForward Solutions LLC, is based in Maryland but operates nationally. Our vision is to build the next generation of leaders.
I am a STEM graduate (computer science) with three decades experience in the telecommunications industry. I have spent the last two decades focused on my passion, building diverse leaders at every level. A pioneer in the millennial space, I have designed and managed programs to transform college hires across disciplines including engineering, software developers, IT, operations, finance, marketing and HR into emerging leaders.

From the classroom to the boardroom, ThinkForward Solutions helps organizations grow leaders, improve cohesiveness and collaboration for multigenerational teams, and foster learning, leading cultures of support.