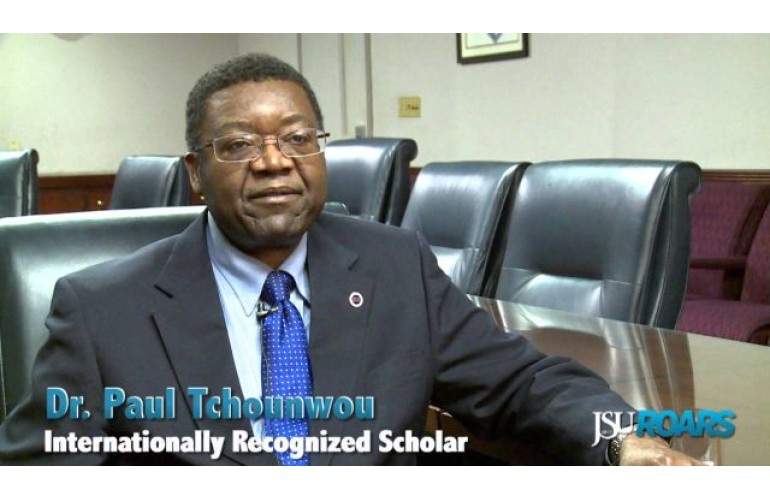 Jackson State University professor Paul B. Tchounwou has been honored by the White House Office of Science and Technology Policy with a Presidential Award for Excellence in Science, Mathematics and Engineering Mentoring.

The award recognizes efforts that enhance research and career development, and  the Presidential Awards program is administered by the National Science Foundation.

Over his 20-year career at Jackson State’s College of Science, Engineering and Technology, Dr. Tchounwou has mentored or co-mentored 73 PhD scholars. Of those, 55 are African Americans, eight are Asian Americans, four are white, and two are Hispanics, with a total of 48 women across all ethnic groups.

A majority of graduate students Tchounwou has mentored hold faculty positions in higher education. More than 30  PhD scholars have received doctoral degrees in the environmental science program that Tchounwou established.

Tchounwou has also supervised thesis preparations for 12 Master of Science students. In addition, he’s mentored 11 junior faculty members at Jackson State University. Six have been promoted from assistant to associate professors and three have been promoted from associate to full professors. Since joining JSU in 1996, he has secured over $50 million in grants to support academic excellence.

“We are grateful to the White House and the National Science Foundation for this coveted honor,” he said. “Although there’s a nationwide shortage of minorities in STEM, Jackson State University is full of possibilities and helping to fill an important gap.”

Tchounwou describes the ideal mentor as one who “is flexible, open-minded and shows a sincere desire to make a difference in the lives of young people.”

“My role is to continue mentoring future leaders of the 21st-century – faculty and students – who are destined to make a difference in the world,”  Tchounwou said.

Dr. Tchounwou has received several awards including the 2013 AAAS Mentor Award “for his transformative impact and contributions towards the production of African American doctorates in the field of environmental sciences.”

He also received the 2003 Millennium Award for Excellence in Research conferred by the Science and Technology Office at the White House, and the 2001 Role Model Award for Exemplary Achievements in Mentoring, Counseling and Guiding Others.

Other honors include the American Association for Cancer Research Faculty Scholar Award for Cancer Research, the International Order of Merit for Contributions to Biomedical Sciences, and the Decree of Merit for Contributions to Toxicology and Public Health. He is a selected member of Delta Omega Honorary Public Health Society.

Currently, he is Jackson State University’s associate dean of graduate and international programs in the College of Science, Engineering and Technology.

He is also a Presidential Distinguished Professor, who serves as director of Jackson State’s Department of Defense Center of Excellence in STEM Education, director of the National Institutes of Health-Center for Environmental Health, director of the Environmental Science PhD Program at Jackson State University, adjunct professor at Tulane University Health Sciences Center, and member of the scientific faculty of the International Biographical Institute in Cambridge, England.