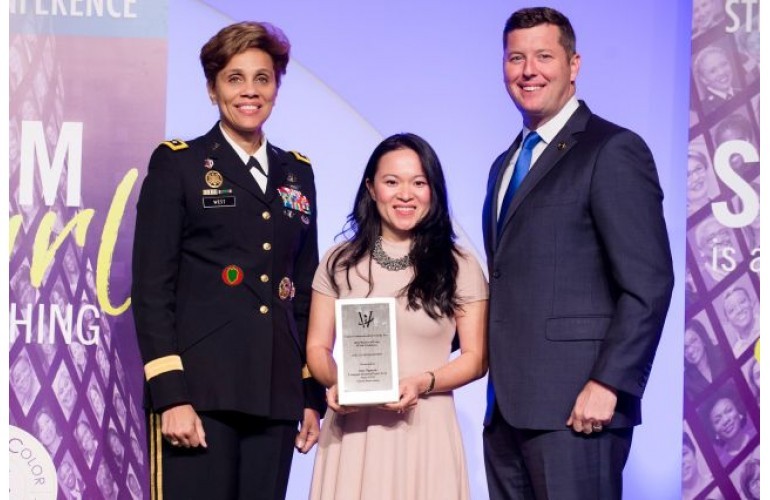 Johnson & Johnson has announced that Dr. Nadja West, seen here presenting an award at a recent Women of Color STEM Conference, has been appointed to its Board of Directors. Dr. West is a retired United States Army lieutenant general and former Army Surgeon General.

“I am pleased to welcome Dr. Nadja West to Johnson & Johnson’s Board of Directors,” said Alex Gorsky, Chairman and Chief Executive Officer. “Nadja is an accomplished healthcare leader with a strong commitment to public service and she brings an impressive and unique combination of business and leadership expertise to Johnson & Johnson. I look forward to Nadja’s contributions to the Board as we continue our pursuit of improving the health of families around the world at such an important moment in time.”

Dr. Nadja West brings decades of strategic and operational experience in national and international executive leadership, strategic planning, and healthcare management. Most recently, Dr. West served as the 44th Army Surgeon General and Commanding General of the US Army Medical Command from 2015-2019.

In October 2020,  retired Lieutenant General Nadja West was one of the notable speakers joining the BEYA Global Health Chairman VADM Adam M. Robinson, who formerly served as the 36th Surgeon General of the U.S. Navy. Other speakers and panelists included RADM Erica G. Schwartz, who advises and supports the Surgeon General regarding operations of the U.S. Public Health.

Dr. West currently serves as an Independent Director on the Boards of Nucor Corporation and Tenet Healthcare Corporation; serves as a Trustee of the National Recreation Foundation, and Mount St. Mary’s University; and as a Board Member of Americares, and The Bob Woodruff Foundation. Dr. West graduated from the United States Military Academy with a degree in General Engineering, The National War College with a master’s degree in National Security and Strategic Studies, and earned her M.D. at George Washington University.

“I am incredibly proud to join the Board of Directors at Johnson & Johnson,” said Dr. Nadja West. “I look forward to working alongside the Board in support of the management team as they continue to deliver transformational innovation, create healthier communities, and put better health within reach of more people around the world.”