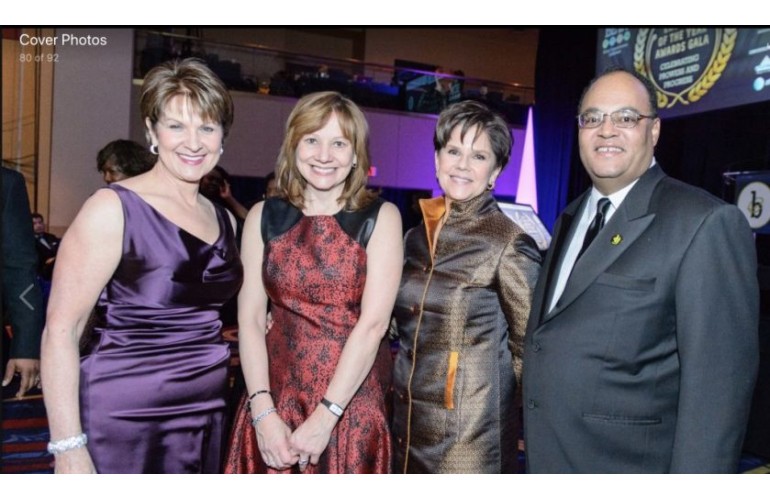 At the 2018 BEYA gala, held during the BEYA STEM Conference in Washington D.C. in February, Hewson spoke about the pride that 100,000 men and women at Lockheed Martin have had to support BEYA for more than 30 years.

Last April, Hewson accepted the 2018 Edison Achievement Award at the Edison Awards gala. The Edison Awards Committee selected her for making a significant and lasting contribution to the world of innovation through her career, her leadership and her achievements.

“I’m humbled and I’m honored to accept this award on behalf of the 100,000 women and men of Lockheed Martin,” said Hewson. “They are the ones who have made—and will always make— our company a leader in innovation on land, at sea, in the air, in space, and in the cyber realm.”

Three months earlier, in her remarks at BEYA 2018, Hewson shared the story of one of those Lockheed Martin people who make a difference to all our lives.

“I’d like to share a story of an individual who found the path to making his impact, thanks to BEYA. Aaron Edmond knew from a young age that one day he would work in aerospace. As a child, he loved to watch documentaries about World War II fighter pilots. And he would spend countless hours exploring the sky through the telescope his parents gave him. Years later, as a college student, Aaron began attending this conference. It was here at BEYA that he secured an internship with Lockheed Martin.

“As a new graduate, he was ready for a new adventure in a new place. Fortunately, through visits to BEYA, and on-campus career fairs, Aaron had built a strong relationship with one of our recruiters. When he saw this same recruiter before his spring graduation, she put him in contact with a manager at our Orlando location.

“Sunny Florida seemed like a good place for a fresh start. Aaron was thrilled that this role involved engineering work on the F-35 advanced fighter program. These days, Aaron is enjoying making his impact on the F-35 training systems team. Aaron’s story is just one of dozens that is shaped here at BEYA each year. His example serves as an inspiration – and a call to action.

“No other fields of discipline can affect change in our world as much as the STEM fields,” Hewson said at BEYA.

The 2019 BEYA STEM Conference is co-hosted by Lockheed Martin Corp. and the Council of Engineering Deans of the Historically Black Colleges and Universities, and sponsored by Aerotek.

For more information on the BEYA Experience call 410-244-7101 or email registrar@ccgmag.com