How Lockheed Martin is Winning the Talent War 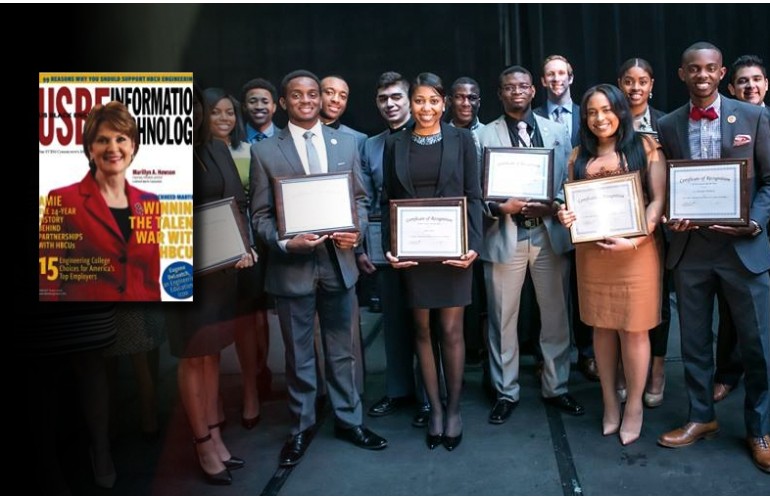 “Building and Fostering a Talent Pipeline”

“Clearly, we are working hard to increase that number and are confident we’ll attract a larger pool of candidates as a result of our partnerships with HBCUs and other organizations,” says Marillyn Hewson, chairman, president, and CEO of the global security and aerospace company, headquartered in Bethesda, Maryland.

Lockheed Martin—with the addition of Sikorsky—employs 126,000 people, with 60,000 engineers, scientists, and technology professionals in 590+ facilities, including major business areas in Maryland; Virginia; Washington, DC; and throughout the United States.

“To ensure we have the strongest pipeline of engineers, scientists, and technical professionals, we strive to recruit employees with a wide variety of backgrounds and experiences,” Hewson said.

Long History of Recruiting from HBCUs

As one of the largest employers of scientists and engineers in the nation, Hewson also knows firsthand the critical shortage of talent in science, technology, engineering, and mathematics (STEM).

“The decline is even more pronounced in the African-American community,” she notes, citing a study that showed Black high school students’ interest in STEM has decreased by 16 percent since 2000.

While more and more black college students are graduating with bachelor’s degrees, the percentage of those students that pursue STEM degrees has declined, she added.

“That’s why we have a long history of partnering with and recruiting from historically Black colleges and universities across the country. My leadership team and I have made a point of meeting with each institution’s leadership to identify opportunities for mutually-beneficial partnerships,” she said.

HBCU engineering schools are located in Alabama, Florida, Virginia, Tennessee, Mississippi, Maryland, North Carolina, Texas, Louisiana, and Washington, DC. With the global standard for programs in applied science, computing, engineering, and engineering technology as determined by the Accreditation Board for Engineering and Technology, all 15 of them produce a sizable number of African-American engineers in the workforce.

Announcing the 2015 top supporters list, two deans from some of the largest HBCU engineering schools spoke of how mutually beneficial partnerships influence their universities.

Dr. Robin Coger, the dean of the College of Engineering and a professor of mechanical engineering at North Carolina A&T University, said ongoing engagements with partners are mission critical.

“This is true for my College of Engineering at North Carolina A&T University and certainly true for the wider group of the other AMIE (Advancing Minorities’ Interest in Engineering) universities,” she said.

“For North Carolina A&T College of Engineering, partnerships are helping the students be ready, thoughtful, and impactful as they continue to become part of the workforce that corporate and government partners so need in order to move their industry forward,” she said.

“But the money is more or less the easy part. They’re hiring our students at the undergraduate and graduate level for permanent hires, internships, and co-ops. A large majority of the total list are coming to our university, recruiting our students, actually impacting them, and helping them develop their careers,” he said.

Corporate and industry partners also serve on Department Advisory Boards, meaning they have direct access as part of the curriculum.

“Maintaining strong communication lines helps achieve successful partnerships with AMIE universities on our common goal of providing technical solutions and the workforce that is well positioned to solve the complex and global problems of our time,” Harris emphasized.

“Our AMIE membership allows us to foster genuine partnerships with engineering deans, campus leadership, and students, and as a result, Lockheed Martin has recruited exceptionally talented engineers and computer scientists,” Hewson said.

“Our engagement with these organizations helps us to ensure that our STEM talent pipeline remains strong. In February 2016 we celebrated the 30th year of our partnership with CCG at the Black Engineer of the Year Awards (BEYA) in Philadelphia—it’s a relationship we intend to build on for many years to come,” she said.

In a recent interview with The Engineer, Lockheed Martin’s CTO said hot areas that are an absolute trend for people to get into are robotics, advanced manufacturing, and digital design, and coupled with new materials, new material science, and what chemistry is doing in nanotechnology. “Our business is built on innovation, which is driven by the STEM fields,” Hewson explained. “As the demand for STEM talent continues to increase, we are putting greater emphasis on our college recruitment.”

In 2015 Lockheed Martin expanded their college recruiting efforts with over 600 campus engagements that included many minorities and female student organizations. “As a result, we had a more than 50 percent increase in the number of recent graduates hired last year. We’ve conducted same-day interviews and made on-the-spot job offers at events like BEYA and the NSBE convention,” Hewson said.

Lockheed Martin is also actively seeking veterans to apply for positions. “Veterans are a natural fit for our company because they have firsthand knowledge of our customers’ needs, and their military service instills them with many of the traits that define our culture of success, including integrity, teamwork, and dedication,” Hewson said. “That’s why Lockheed Martin has participated in over 200 military hiring events and almost 36 percent of our external hires are veterans.”

Around the world, the company has business locations in over 70 countries and territories engaged in research, development, design, manufacture, integration, and sustainment of advanced technology systems, products, and services.