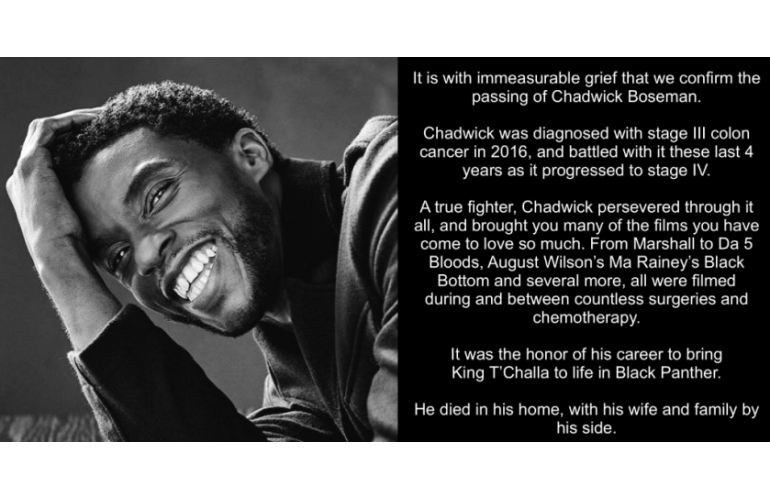 After a 4-year battle with colon cancer, iconic actor Chadwick Boseman, 43, passed away at home surrounded by his loved ones. Sadness and grief quickly spread as the world mourned the loss of such a great individual. The news came as a shock to most of us, due to the fact that Boseman never made his diagnosis public.

The official announcement was made via Boseman’s social media page. The post, which has now broken records for the most-liked tweet ever on Twitter, informed us that during his 4-year battle with colon cancer, Boseman continued to work and brought us some of his most iconic performances.

The announcement read, “From Marshall to Da 5 Bloods, August Wilson’s Ma Rainey’s Black Bottom, and several more, all were filmed during and between countless surgeries and chemotherapy.”

Even before his portrayal of Marvel’s superhero, Wakandan King Black Panther, Boseman had already brought prominent figures to the screen such as Jackie Robinson, James Brown, and Thurgood Marshall.

His career seemed to be dedicated to representing Black heroes and telling Black stories. He understood that representation mattered. His portrayal of these heroes allowed Black people to see a version of themselves on screen.

When Boseman agreed to play T’challa, ruler of the fictional African nation Wakanda, the most technically advanced nation in the world, he not only allowed a new generation of Black kids to see themselves as superheroes, but he presented a world where people of African descent weren’t an afterthought in the development of technology, but leading it.

The greater impact of Boseman’s role is yet to be determined, but we can be sure there is a new generation of scientists, technologists and engineers who now know that there is a place for them in the world of STEM. Now, without a doubt, they know it is possible. And that alone is a legacy worth leaving.

To our readers, 2020 has been rough for us all. Keep your head up and hold strong! #yibambe #longlivetheking