Making the Promise of BEYA: Meet a first-ever winner 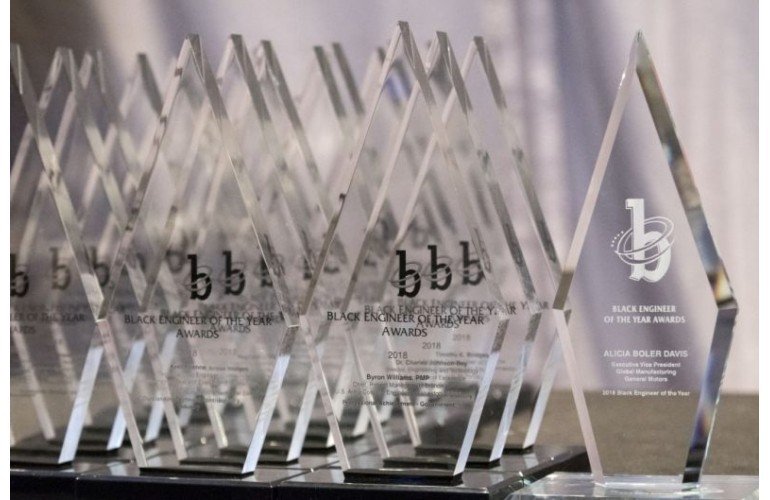 BEYA handed out its first awards at a science, technology, engineering, and math (STEM) conference held in 1987. The event was organized by Career Communications Group’s Black Engineer magazine and engineering deans from historically black colleges and universities to advance  STEM.

In November 2019, Smoot, now a Research Fellow at Disney Research, gave a wide-ranging interview to USBE magazine. The BEYA winner spoke about his award, which sits on his desk (photo inset), as well as the rewards of engineering as a career over the last three decades.

Smoot was an engineer at Bell Communications Research when he won the Most Promising Engineer Award in 1987. By that time, he had already earned three patents in the fields of optical communications and subscriber loop career system. He had also started a program at Bell Labs for the development of leadership and technical skills for minorities and working with summer interns.

As manager of the Broadband Network Technologies Research District, he managed research on optical telecommunications systems and high-speed switching systems. Some of his achievements at the time included leading a research group responsible for a system that allowed several channels of high-quality digital video information to be distributed via optical fiber to telecommunication subscribers. Smoot earned several patent applications for new ways of solving traffic tie-ups in high-speed self-routing packet switches that send data through a network, much as one would send a letter through a public mail system. Spurts of data are sent with an address and delivered through a network, with very little or no centralized intervention by the network.

“BEYA One was a wonderful experience,” Smoot recalled. “Winning the award was both great for me to attend the ceremony where I received the award and seeing other folks who were aspiring as I was to do well.

“Bellcore had done its best to recruit African Americans and other underrepresented groups. Winning an award like that, which was covered in the local Bell Communications Research newspaper, is wonderful for the person winning it. It was great. But it was more important that other young black folks, who attended the awards, see that people just like them, in my case engineering, can do the same things.”

“It was thirty years ago,” continued Smoot. “I remember the pride in having won the award. More so I remember people looked at the award as achievable by ordinary human beings. That to me is the legacy effect. Somehow, I made the promise of the award,” he noted, adding that BEYA means you have been selected from other folks who are amazing.

Take, for example, Jim West, who won a Lifetime Achievement Award at BEYA, and was a mentor to Smoot at Bell Labs. “He is an African American and the inventor of the electret microphone. You and I are on a conference call right now, recording this. And I’m speaking through a telephone. You may be speaking into an iPhone, iPad or another device. I guarantee you that it has an electret microphone in it. Many people don’t know that. Over the last thirty or forty years, that’s been the predominant technology. Every single telephone in the United States now uses an electret microphone,” Smoot explained.

At the 1987 BEYA gala, Pat White, Smoot’s boss at the time, also won an award. White was the architect of the U.S. telephone network, Smoot said.

Back then he explained, Bellcore would have a single person responsible for the overall design of the telephone networks, a high-level position. And Pat White, an African American, became one of those architects. “All the networks of the United States were in his hands. Not a lot of people know that. So, having the award was letting people know of the contributions of black folks,” Smoot said.

The first annual BEYA Conference took place on the campus of Morgan State University in Baltimore, MD. Planned to coincide with National Engineers Week, BEYA also serves historically as a tribute to Black History Month. BEYA recognizes past and present contributions of African Americans to engineering.

In an earlier interview with Career Communications Group CEO Tyrone Taborn and chairman of the BEYA STEM Conference, Taborn said in 1987 many students then couldn’t get internships in industry or government. “Most had never met an engineer who looked like them until they got to college. Engineering deans of Morgan State, Howard University, and I decided to change the narrative. Black Engineer of the Year was created.”

“When I look at winners, especially of the Black Engineer of the Year Award, these are amazing people,” Smoot noted. “BEYA raises the consciousness for the things that black people achieve regularly, he added, but are overlooked.

Smoot said because of his own experience in not being aware of opportunities he could have taken advantage of, he formed an employee resource group (ERG) for black laboratory employees and their families, an ERG that ultimately had corporate support. He stressed that he has carried his drive for diversity and inclusion throughout his career.

At Disney, where he serves as a Disney Research Fellow, one of a select group that can pursue their ideas wherever they might lead, he attends meetings of Ergs that keep employees informed about opportunities they might not be aware of. Smoot said he also does outreach, speaking in high schools and recruiting at minority-serving institutions, including historically black colleges and universities.

“It is everyone’s responsibility, more so African Americans, that everyone has a shot at making contributions to society,” he said. “It’s a waste if you have intelligent, smart, eager young people who want to go into technical fields and are stopped. Not because they can’t do the work but because they just don’t know about opportunities.”

Smoot said he tries to do as much as he can to get young interested in science and technologies that make the world work. He said parents must understand that their children can do anything. “Your children are the future and will build the new world we’re going into,” he advised. “You only get good at something by doing it,” he said.

To students, he recommended growing opportunities in virtual reality and augmented reality.

“Virtual reality, where you put the headset on and are completely immersed in another world, and augmented reality, where you are being helped by a pair of glasses that show you what you need to know as you’re walking down the street, or anywhere in the world.”