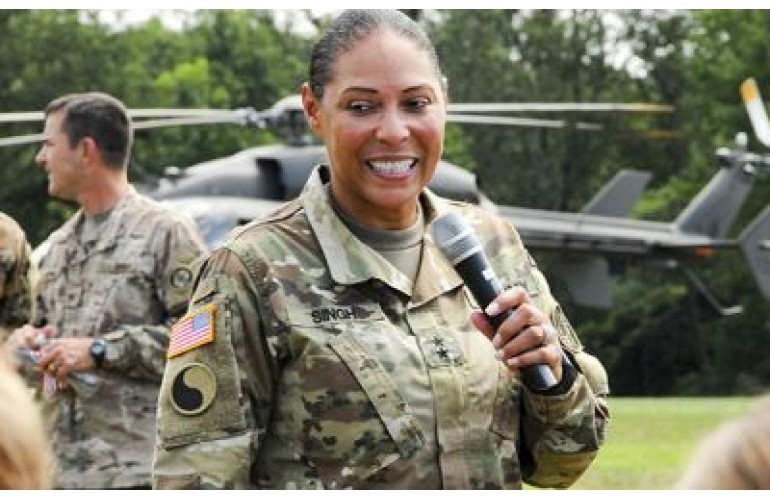 This is an historic appointment as Singh becomes the first female and the first African American to command the Maryland Army National Guard.

Singh was an enlisted soldier for eleven years and earned her commission through the Maryland Army National Guard Officer Candidate School in 1991. She has served in every level of command from the company through regimental levels.

In addition to her deployment to Afghanistan, from September 2011-July 2012, Singh also served as assistant chief of staff for logistics for the 29th ID in Kosovo from July 2006-October 2007.

In her civilian career, Singh is a managing director with Accenture Federal Services, a major consulting corporation, working in the public safety portfolio. She has more than 20 years of experience in implementing large systems, but she also works on developing new client relationships and business opportunities.

The Maryland Military Department is comprised of the Maryland Army and Air National Guard, the Maryland Emergency Management Agency and the Maryland Defense Force. Since 9/11 more than 10,600 citizen-Soldiers and Airmen have been called to serve on active duty in support of Operation Iraqi Freedom, Operation New Dawn, Operation Enduring Freedom and the relief efforts for many natural disasters across the country. The Military Department consists of more than 7,000 National Guard members, Defense Force volunteers, and civilian employees, contributing more than $380 million annually to Maryland’s economy.

***Linda L. Singh is now a major general of the Maryland Army National Guard. She was appointed as the 29th adjutant general of Maryland effective January 21, 2015,