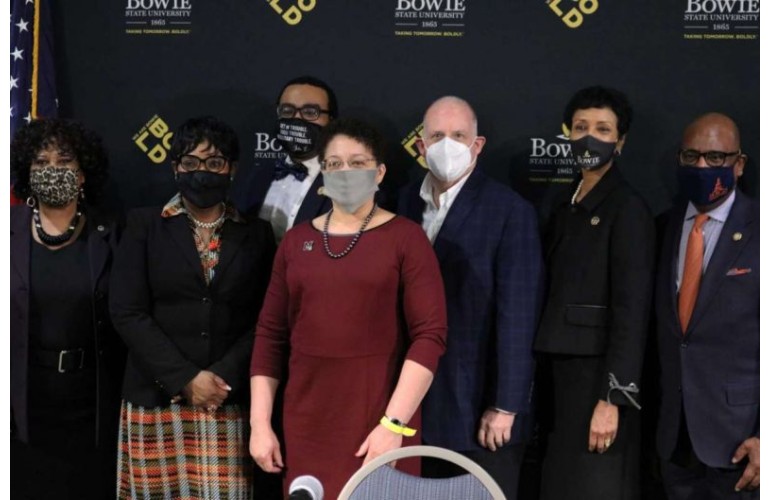 BOWIE, Md. (AP) — Maryland Gov. Larry Hogan signed legislation on Wednesday to settle a 15-year-old federal lawsuit relating to underfunding at the state’s four historically Black colleges and universities for $577 million over a decade. “We finally got to this day,” Maryland House Speaker Adrienne Jones, a Democrat and the state’s first Black speaker who sponsored the bill, said to applause at Bowie State University, adding that she is a sister and a mother to HBCU graduates.

Hogan, lawmakers and school officials described it as a landmark in addressing historic inequities in funding for the schools.

“We finally got to this day,” Maryland House Speaker Adrienne Jones, a Democrat and the state’s first Black speaker who sponsored the bill, said to applause at Bowie State University, adding that she is a sister and a mother to HBCU graduates.

Hogan, a Republican, vetoed a similar bill last year after citing economic difficulties created by the COVID-19 pandemic. Hogan told reporters the state was facing potentially daunting deficits and uncertainties at the time and that he vetoed other costly measures as well. He also noted that the state has made historic investments in the schools in recent years.

“This is an important occasion and we’re here today to enact an historic bipartisan measure that will be an unprecedented step forward in addressing inequities in our higher education system by making substantial investments in Maryland’s historically Black colleges and universities,” Hogan said.

“We are growing, but we need the additional support to build out new academic programs to open up our doors wider for the students who want to attend Bowie State University, and so for each one of our HBCUs it means a great deal for the students for their families and our communities as well as the workforce.”

The measure, passed unanimously in the Senate and by an overwhelming majority in the House, would not begin payments until fiscal year 2023.

The measure’s provisions are contingent on a final settlement agreement June 1. Michael Jones, a leading attorney for the HBCUs, told The Associated Press last week he did not anticipate any problems reaching a settlement, once the settlement measure became law. Jones described it last week as “one of the largest pro bono civil rights settlements in history.”

The lawsuit dating to 2006 alleged that the state had underfunded the institutions while developing programs at traditionally white schools that directly compete with and drain prospective students away from HBCUs.

In 2013, a federal judge found that the state had maintained “a dual and segregated education system” that violated the Constitution.

“The General Assembly’s successful effort to provide the four HBCUs with long overdue funding and a process for creating and developing high demand, unique programs will enable the HBCUs to be competitive in recruiting students of color and all students, thereby helping bridge the racial divide in the state’s higher-education system,” said Jon Greenbaum, chief counsel and senior deputy director at the Lawyers’ Committee for Civil Rights Under Law, who served as co-lead counsel in the case.