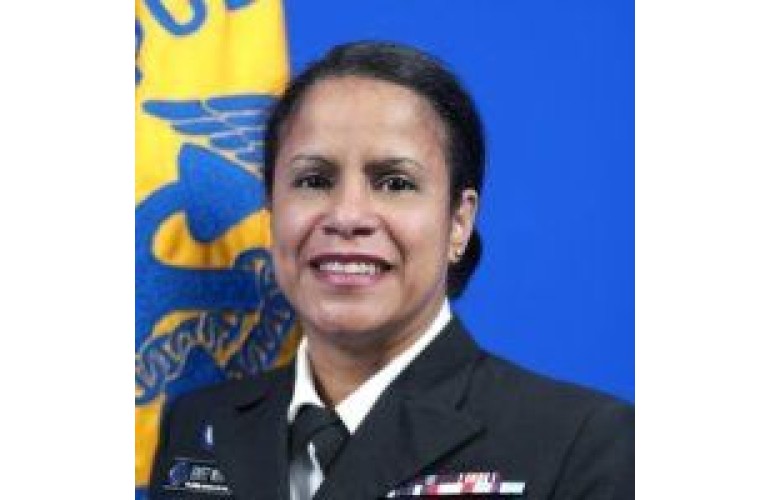 Captain Mercedes Benitez-McCrary has been selected by Vice Admiral Vivek Murthy, U.S. Surgeon General, to serve as the Chief Therapist Officer for the United States Public Health Service. Capt. Benitez-McCrary is currently a senior advisor in the Learning and Diffusion Group in the Center for Medicare and Medicaid Innovation.

In 2012, Capt. Benitez-McCrary won the Medical Leadership Award at the BEYA STEM Conference.

Over the past 30 years, she has worked as a clinician, college instructor, hospital administrator, business partner, administrator, researcher, and a public health officer.

She began her career providing speech-language pathology and audiology services to under-served populations in Washington, D.C. Soon after, in 1983, she was appointed faculty/clinic director at the Howard University Medical School and Hospital.

There, she supervised clinical training of speech-language pathology and audiology graduate students from Howard, George Washington University, and the University of Maryland. These former students are now serving culturally diverse consumers across the country.

Also during her time at Howard University, 1983-1990, she donated services to those in need of speech-language pathology and audiology but had trouble accessing services. After Howard, she relocated to the University of Medicine and Dentistry of New Jersey and continued to emphasize improved healthcare services for the underserved.

Through her association with the New Jersey healthcare community, Benitez-McCrary was able to secure then-New Jersey Gov. Christine Todd Whitman, along with one-time New York Mayor David Dinkins and NIST (National Institute of Standards and Technology) director, Arati Prabhakar, as speakers for the 1994 conference of the National Organization of Black Chemists and Chemical Engineers (NOBBChe).

In 1997, she took up a three-year appointment as a clinic director at District of Columbia General Hospital. During this period at D.C. General, Benitez-McCrary earned peer recognition for her expertise in restoring speech capabilities to stroke victims.

In 2003, while serving as special assistant to the Surgeon General of the United States, she played a big role in developing policy and organized a White House Conference on Health Literacy and Health Disparities on behalf of the surgeon general. She has served on committees of the American Speech-Language and Hearing Association, responsible for developing policies to improve speech and hearing services in medical settings.

Her most recent emphasis has been in the area of healthcare literacy and communication in multicultural populations to improve the delivery of services to these groups.

Benitez-McCrary has also brought refreshing points of view and energy to the African-American and Latino health communities and she provides strategic input for the implementation of the 2010 Affordable Healthcare Act.

Since 2001, she has also made significant contributions at the Centers for Medicare and Medicaid Services. Her accomplishments include independent research and drafting of quantitative analysis for regulatory paperwork reduction on facilities and portable X-ray services at more than 8,000 home health centers and 3,000 hospices.

In addition, she has served with distinction as an officer of the U.S. Public Health Service. In 2005, she led her battalion to critical disaster areas in New Orleans after Hurricane Katrina, and again to Galveston Island in Texas in 2008 after Hurricane Ike.

She continues to make valuable contributions to speech-language pathology and audiology and to its diverse consumers.

Her professional qualifications include earning a Bachelor of Arts in Speech Pathology and Audiology from New York University in 1976 and a master’s in the same field from George Washington University in 1978.