Meet the first 3 Black Engineers of the Year 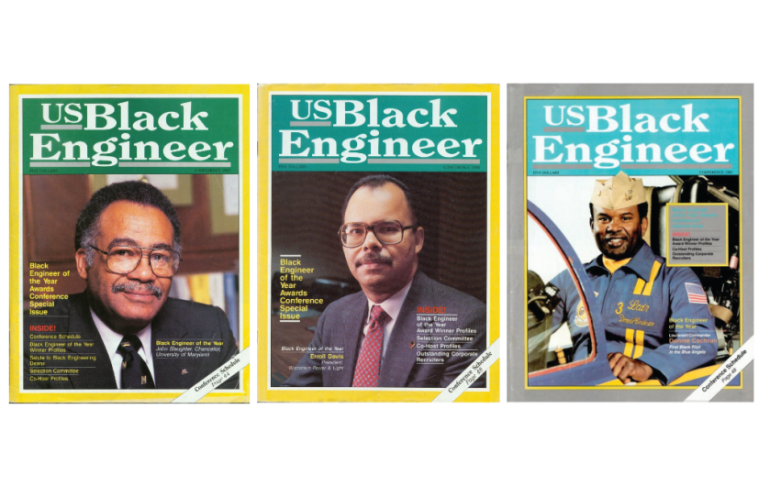 In 1987 Black representation among the 1.6 million engineers in the United States was 2% or approx 32,000 men and women. That year, the Black Engineer of the Year Awards (BEYA) handed out its first awards at a science, technology, engineering, and math (STEM) conference.

The event was organized by Career Communications Group’s US Black Engineer magazine and engineering deans from historically Black colleges and universities (HBCUs) to advance STEM.

The first recipient of the Black Engineer of the Year Award in 1987 was Dr. John B. Slaughter. During his 50-year career,  he has received many distinctions for his dedication to increasing diversity in science and engineering.

Currently, as Deans’ Professor in Education and Engineering at the University of Southern California (USC) Rossier School of Education and Viterbi School of Engineering, Dr. Slaughter’s research focuses on populations underrepresented in STEM fields, as well as affordability and access in education.

His influence has impacted efforts such as the American Society for Engineering Education Deans Diversity Pledge, spearheaded by USC Viterbi, in which 250 engineering deans have pledged to take concrete actions to broaden the participation of populations underrepresented in STEM fields.

In 1980, Dr. Slaughter was appointed director of the National Science Foundation (NSF). During his tenure, he implemented policies that supported the establishment of programs designed to expand research efforts at historically Black colleges and universities (HBCUs).

As Chancellor of the University of Maryland, College Park, Dr. Slaughter led an effort to increase the number of students from groups underrepresented in STEM, which resulted in significant increases in enrollment. As Occidental College President, Dr. Slaughter used his position to considerably increase the representation of minorities in both the student population and among faculty and staff.

In 1982, Dr. Slaughter was elected a member of the National Academy of Engineering (NAE). He received the Black Engineer of the Year Award in 1987, the 1997 Martin Luther King Jr. Award, the Reginald Wilson Award from the American Council on Education (2003), and the NAE Arthur M. Bueche Award in 2004.

In 2015, the White House recognized his mentoring with the Presidential Award for Excellence in Science, Mathematics, and Engineering Mentoring. He also received the USC Provost Mentoring Award in 2016 and the USC Presidential Medallion – the university’s highest distinction – in 2019.

During Davis’ tenure, efforts to increase the number of students enrolling in STEM were ramped up and USG was cited for its achievements in increasing the numbers of K-12, particularly minority, teachers it produces.

Prior to being named chancellor, Davis served as chairman of the board of Alliant Energy Corporation from 2000-2005, after joining the company in 1998 as president and chief executive officer.

Before the creation of Alliant Energy, Davis was president and CEO of WPL Holdings from 1990 to 1998. From 1978-to 1990, he rose through the ranks at Wisconsin Power and Light Company, ending as CEO and president. His career also includes positions at Xerox Corporation and Ford Motor Company.

For the eleventh episode of Career Communications Group’s High-Tech Sunday podcast, Capt. Donnie Cochran, the 1989 Black Engineer of the year,  talked about his experience as the first Black pilot to fly with The Blue Angels, the flight demonstration squadron of the United States Navy.

Cochran’s career included duty as a fighter pilot, flying the RF-8G and F-14A & D from the decks of aircraft carriers. He was the executive officer and commanding officer of Fighter Squadron 111.

Now retired, Cochran is a recognized expert and motivational speaker who inspires high-performance individuals to achieve heightened and sustained performance in both their personal and professional lives.

He has received many awards and honors including the Distinguished Graduate Award from Savannah State University, the 1989 Black Engineer of the Year Award, two Legion of Merit Medals, (3) Meritorious Medals, the Navy Commendation Medal, Air Medal, and numerous other awards and honors.