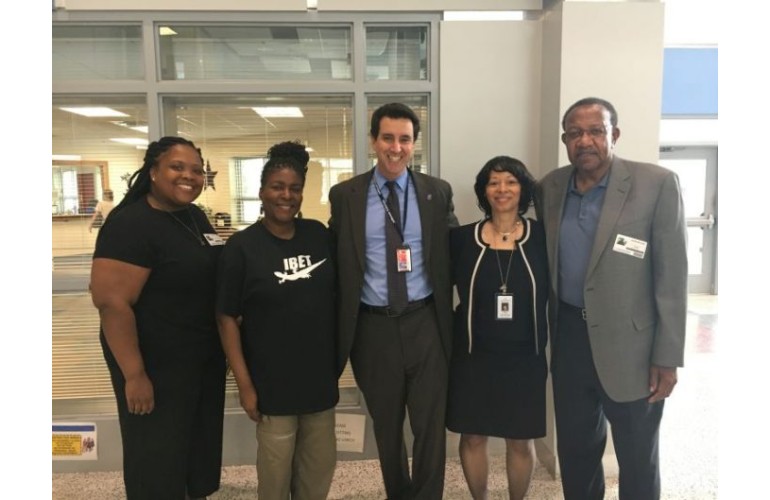 Moving students to the top of the pack in math and science is key. That’s why mentoring plays such a big role at the Thomas Jefferson High School for Science and Technology.

The Thomas Jefferson High School for Science and Technology is a unique public school that serves Arlington, Fairfax, Loudoun, and Prince William counties, as well as the cities of Fairfax and Falls Church.

“We had an excellent year,” Mr. Jesse McCurdy said (pictured far right). “Worthy of note, the mentors were invited to several school programs and participated in two significant activities during the year.”

“I always recommend having a mentor or two—maybe even three,” the Howard University engineering alumnus said at his retirement. “All of that comes together and helps you out, giving you different ideas and different approaches to life.”

Since its first graduating class in 1985, student research has been a must for the Thomas Jefferson High School Diploma.

Students have to  complete an original engineering or experimental research project in an on-campus laboratory or off-site through mentorship at a government, corporate, or university research laboratory.

The Mentorship Program is an alternative way to meet the senior technology research graduation. Mentorship students work alongside mentors from outside agencies and report to their school.

The program helps students test their interests in real life, working with professionals like Mr. McCurdy who have chosen to share their insights and expertise.

Students get a chance to do research or projects under the direction of experienced scientists, engineers, and others in scientific businesses, education, and government agencies, in the D.C. area.

“Dr. Glazer and Ms. Smith took part in the 2017 BEYA Stars and Stripes events,” Mr. McCurdy said. “Both participated in the speed mentoring session and attended the awards dinner,” he added.

The Stars and Stripes Youth Mentorship Program takes place early in the evening and flag officers take part in mentoring sessions with high school and college students from the Washington metro area. The students are chosen  their by schools to take part in the mentoring program.

The 2017 BEYA Conference was held February 9– 11 at the Washington Marriot Wardman Park in Washington D.C. There were thousands of professionals and students in STEM.

Thomas Jefferson High School for Science and Technology is the product of a partnership forged between the business community and Fairfax County Public Schools to improve education in science, mathematics, and technology.