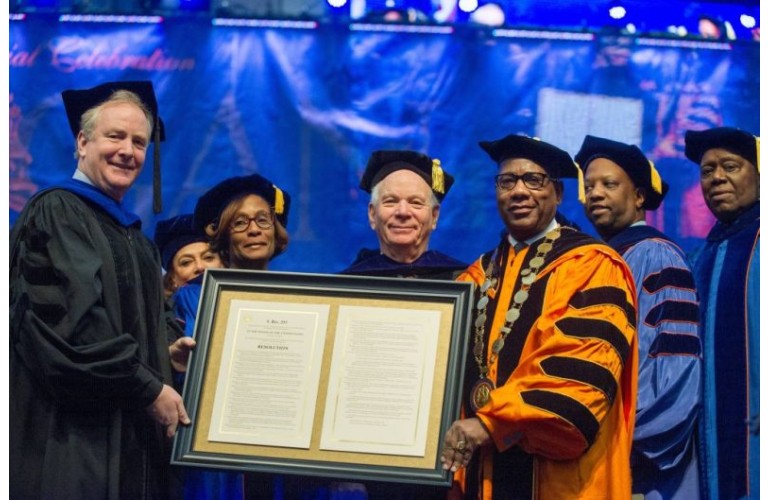 The ceremony was the third Commencement of Morgan’s Sesquicentennial Celebration, which began in December 2016. Maryland Lt. Gov. Boyd Rutherford gave the keynote address and was awarded an honorary Doctor of Public Service during the ceremony, and other honorary doctorates were awarded to six former Morgan presidents.

“For the past year, we have had a spectacular celebration of our achievements over the past 150 years,” said Morgan President David Wilson. “We have celebrated the purpose of our founding in 1867 as a small class of nine students taught at Sharp Street Methodist Episcopal Church. We have celebrated the progress we have made for a century and a half in meeting the evolving needs and ambitions of our community, and we have celebrated the great promise or potential that we hold today to grow the future and lead the world as Maryland’s Preeminent Public Urban Research University.”

Lt. Gov Rutherford’s message was well-received by the degree candidates.

Before finding success as a technology salesperson, a lawyer and a high-level administrator in state government, he earned a bachelor’s degree in economics and political science from Howard University and then floundered in his first career as a banker, Rutherford told the audience.

“I could not have imagined when I was in your shoes,” he said. “I am incredibly thankful that in those times of uncertainty, I chose to follow my instincts. Instead of taking the easy route or the obvious path, I made my own. If you believe in something, and if you work hard and stay disciplined, you will succeed.”

Rutherford encouraged the soon-to-be graduates not to fear failure, to continue to acquire new knowledge and skills and to cast aside labels, including racial stereotypes.

Candice Marshall, an international student from St. Lucia, became Morgan’s first doctoral graduate in mathematics when she received her degree in industrial and computational mathematics.

Senior Class President Michaela Scott bid farewell to her peers with the “Salute to the Graduates” address.