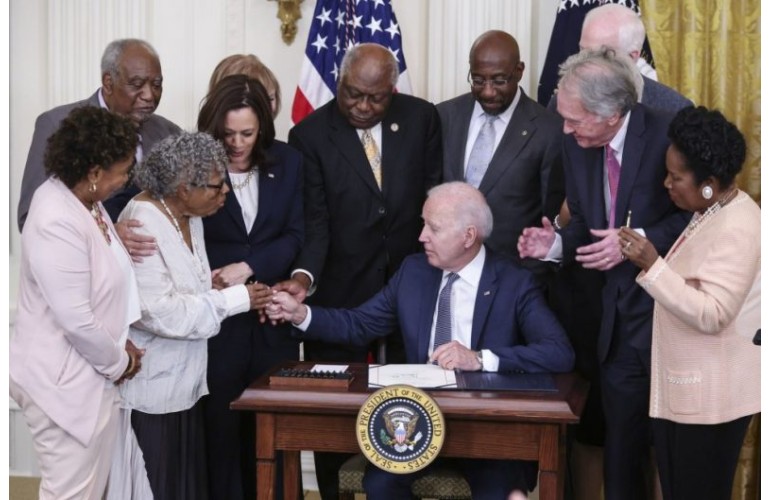 Opal Lee, the 94-year-old known as the “grandmother of Juneteenth,” leaned in as President Joseph R. Biden signed the Juneteenth National Independence Day Act into law at the White House Thursday. According to NBCBLK, Ms. Lee has pushed for years for June 19 to become a national holiday and now her dream has become a reality.

The 94-year-old activist known as the “grandmother of Juneteenth” has pushed for years for June 19 to become a national holiday. Now her dream has become a reality.https://t.co/BjjG1vMlNy

“On June 19, 1865 — nearly nine decades after our Nation’s founding, and more than 2 years after President Lincoln signed the Emancipation Proclamation — enslaved Americans in Galveston, Texas, finally received word that they were free from bondage. As those who were formerly enslaved were recognized for the first time as citizens, Black Americans came to commemorate Juneteenth with celebrations across the country, building new lives and a new tradition that we honor today. In its celebration of freedom, Juneteenth is a day that should be recognized by all Americans. And that is why I am proud to have consecrated Juneteenth as our newest national holiday.” (A Proclamation on Juneteenth Day of Observance, 2021)

Ruth Simmons, president of Prairie View A&M University praised “the activism and courage of Ms. Opal Lee of Fort Worth, Texas” and called for everyone to improve upon the benefits that we have all received from those who fought for our freedom and civil rights.

“We can achieve that by being equitable ourselves, by respecting difference, by speaking truth to power, by accepting the full burden of citizenship, and by fighting hopelessness,” Presdient Simmons said in a special meesage on Juneteenth. “In the tradition of our Prairie View A&M forebears, we must be believers in and agents for justice, acting always on the belief that every human being, by God’s grace, is born free and equal.”