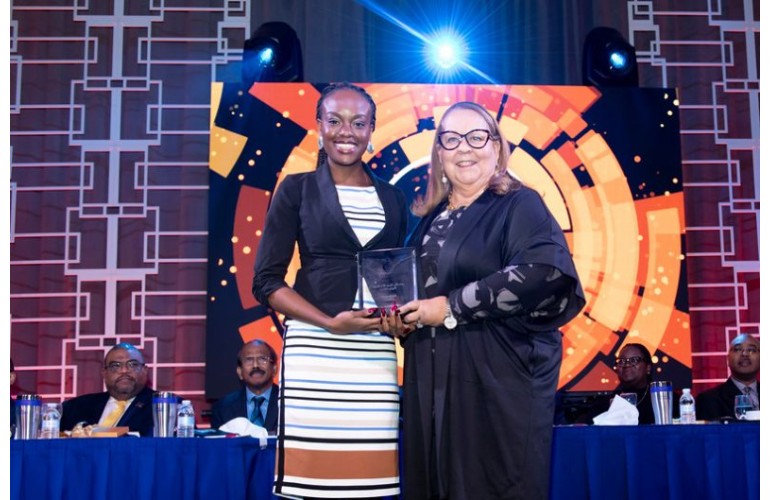 Every year at BEYA’s Historically Black College and University (HBCU) Engineering Deans Breakfast, outstanding professionals in science, technology, engineering, and math (STEM) are recognized with legacy awards, each of which is named after the men and women who have won the top award at the Black Engineer of the Year Awards (BEYA).

“Nnennaya Udochu is an analog engineer focused on the power delivery and integrity of system design platforms addressing low power solutions to improve battery life,” Dr. Thomas said. “Her contributions have helped drive high-quality product launches, innovation for new technologies and growth for the business to ensure customer satisfaction. Nnennaya is a passionate engineer and a role model within her community empowering the youths. She represents the Intel cultural values of being fearless and customer-obsessed by leading design platforms for her team. I am proud to present Nnennaya Udochu.”

Nnennaya Udochu came to the United States from Nigeria. “I grew up with loving parents who instilled discipline and the art of resilience,” she said. “Their constant support inspired me to pursue a career in STEM as an engineer.” Udochu also spoke about the many challenges along the way.

“I learned that rising above them creates room for growth, and consistent hard work always beats talent,” she said. ” As a Black female engineer, I want to inspire young ladies and men pursuing STEM careers within our community. BEYA is building a remarkable legacy by encouraging young Black engineers to reach great heights. I thank my siblings and parents for positive affirmations that dared me to keep the bar raised high and my colleagues.”

Udochu earned a bachelor’s degree at Wichita State followed by a master’s degree at the University of Texas, Arlington. After serving as an intern with a laser company, she worked at Clarkson University as research sustainability & environmental engineering assistant with Asset To Serve Humanity. Back at Wichita State, Udochu worked as an energy research intern in the reliability engineering automation laboratory. She spent the next year as a research energy and systems assistant at Texas A&M University. Other positions she has held include systems engineer at Cisco and a supplemental instruction leader at UT Arlington University. Currently, Udochu serves on the steering committee for Engineers without Borders and is the founder of the local United Nations Association of Young Professionals. She hopes to create awareness among young adults to address world pressing issues governed by the United Nations.

Thomas grew up in Virginia, where she attended segregated schools. Her father was the principal of a high school in Portsmouth, Virginia, and her mother was the school’s guidance counselor.

After graduating from high school, she first attended Howard University, where she earned a bachelor’s degree in zoology in 1965. She went on to earn a master’s degree in microbiology from American University. Two years later, she returned to Howard for a Ph.D. in cytology. Dr. Thomas joined the Mitre Corporation in 1973.

When Mitretek (now known as Noblis) was spun off from Mitre, Dr. Thomas was tapped to serve as the company’s first president and CEO. As chief executive, she led research projects that ran from developing gaming technologies for first responders to creating a sick city, with scenarios featuring a naturally occurring, or terrorist-instigated biological event.

Over the three-decade span of the conference, Dr. Thomas has been a regular attendee. In one interview with BEYA Chairman Tyrone Taborn, she recalls slipping and breaking her arm during a gala. Fortunately, there “was a doctor in Bob Stevens’s security detail and they got me all done up to walk across the stage,” she said. Robert Stevens, now retired, served as Lockheed Martin’s CEO from 2004-to 2012. Reflecting on her long career, Dr. Thomas said if she could do it all over again she wouldn’t try to be perfect.

“Prioritizing means sometimes not being able to put as much focus on one aspect of your life and you have to able to forgive yourself,” she said.A young professional can’t be a mom who goes to work and spends all day feeling guilty, she added.

Still an active retiree, Dr. Thomas volunteers her time on committees. According to the United States Energy Association, she is a member of the American Institute of Aeronautics and Astronautics (Associate Fellow), the American Society of Toxicology, the National Defense Industrial Association, and the Teratology Society, and the International Women’s Forum.