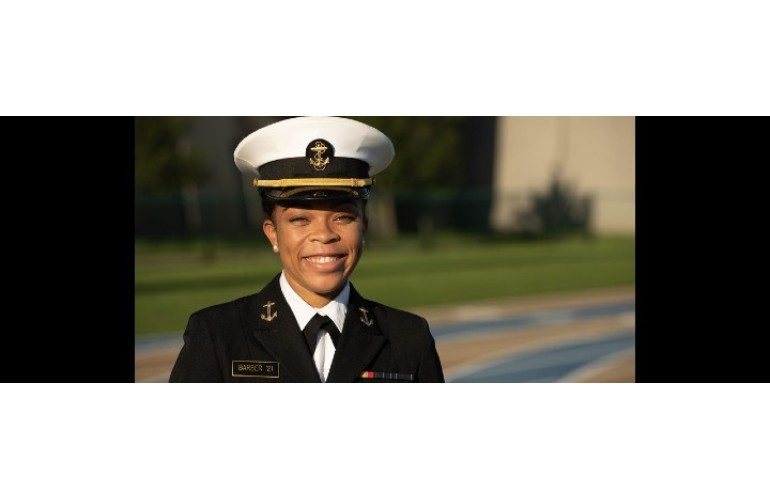 “Earning the title of brigade commander speaks volumes, but the title itself is not nearly as significant as the opportunity it brings to lead a team in doing something I believe will be truly special,” said Barber in a statement. “I am humbled to play a small role in this momentous season of American history.”

According to the U.S. Naval Academy (USNA), the first female brigade commander was Midshipman 1st Class Juliane Gallina from the class of 1992, who served in the position during the fall of 1991.

Barber will be the sixteenth woman selected for brigade commander in the 44 years women have been attending the Naval Academy.

The brigade commander is the highest leadership position within the brigade and the semester-long position is selected through an application and interview process by senior leadership from the Commandant’s staff. Barber served as the 13th company’s executive officer this past Plebe Summer and currently serves as the brigade’s 1st regiment executive officer.

Barber, a graduate of Lake Forest High School in Illinois, is a mechanical engineering major and aspires to commission as a Marine Corps ground officer.

She is also secretary for the National Society of Black Engineers (NSBE), and a member of the USNA Gospel Choir and Midshipman Black Studies Club.

Two summers ago, Barber completed a 7-week internship with the Department of Energy’s Lawrence Livermore National Laboratory, where she was instrumental in doing breakthrough research on bio-electrochemical uses for carbon nanotubes. Her research in developing legislative strategies to address education disparities in minority communities earned her selection as a 2020 Truman Scholar national finalist.

“Sydney stands out amongst her peers, for not only her exemplary record but for her clear vision of how she intends to make the world a better place and her accompanying bias for action. We were incredibly proud to have Sydney represent the Naval Academy in her Truman Scholarship interview this year,” said Lt. Cmdr. Darby Yeager, a member of the U.S. Naval Academy’s Truman Scholarship selection committee.

She was recently invited to speak at the regularly scheduled meeting of the Board of Visitors, the academy’s congressional oversight committee. Barber discussed how she has negotiated her time as a midshipman in the COVID-19 environment, her activities as a midshipman striper, leadership in Bancroft Hall, balancing activities over the summer, and her experience at Leatherneck, the Marine Corps’ summer training in Quantico, Va.

“We are the architects of our future, and every day we earn the right to carry the torch that was once lit by the heroes, pioneers, and giants who came before us,” said Barber. “I owe everything to every person who paved the way for me, so I now pour my heart and soul into blazing the trail for the generations to come.”

Barber has initiated a STEM outreach program that leverages mentoring, literature, and service lessons to serve middle school-aged girls of color. She also led a team to organize the inaugural USNA Black Female Network Breakfast to bridge the generational gap between current black midshipmen and alumni.