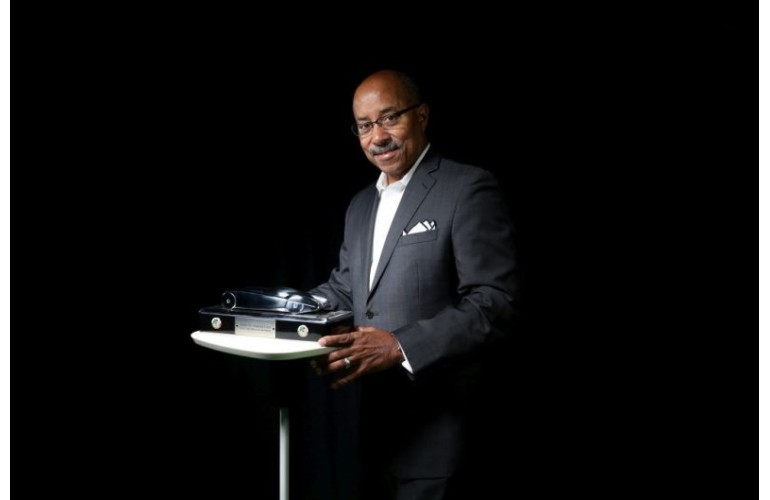 Award show season is almost over. This year’s Car, Utility, and Truck of the Year winners have all been crowned at the North American International Auto Show.

Did you know that the 2015 Black Engineer of the Year created the all-new trophy that honors the most outstanding car, truck and utility vehicle of the year?

In the photo above, retired General Motors Design Director Ed Welburn poses with the cast aluminum award he designed.

According to Welburn, the award embodies a vision of a vehicle in the same way the statue for the Oscars represents an ideal version of the human form.

“What could be better than to have our new trophy created by one of the auto industry’s greatest designers,” said jury President Mark Phelan. The North American Car, Truck, and Utility Vehicle awards are our industry’s most prestigious and highly desired. This new trophy gracefully embodies the style that has won automotive design a special place in the world of art.”

Reading Welburn’s chat with Gale Horton Gay in a “Black Engineer of the Year: Where Are They Now” series, you can’t help but think this should be taught in schools during Black History Month.

“I really want to help young people to understand the possibilities in a career,” Welburn told Horton writing for USBE magazine.

Welburn said he often shares his personal experiences about his career path including challenges, lessons learned and how to take advantage of opportunities when they occur.

“I want to help them understand if there is something they’re really passionate about they need to really focus and study and dream and work hard to achieve that,” he said.

Asked what young professionals should do to be recognized for their good work on a job, Welburn cautioned that there’s a delicate balance that should be maintained.

“As a designer, you sign your sketch. It’s up on display. Your name is right there,” he said, adding that design work is under tremendous scrutiny, much more than in other professions.

The bottom line, according to Welburn, is that there’s no substitution for hard work and striving for excellence every day of one’s professional life.

Before he retired as GM’s top car designer year, his workday involved reviewing design plans on 20-foot by 10-foot screens at the Detroit design center.

The designs reviewed by Welburn covered a wide range: vehicle interiors and exteriors as well as auto show and dealership displays.

Welburn and his team were responsible for the design development of every GM concept and production car and truck globally.

The Buick Avenir went on to capture awards for “Best Concept Vehicle” and “Most Innovative Use of Color, Graphics, and Materials.”

In April 2016, Road and Truck compiled an album of some of the best designs From Ed Welburn’s 44 Years at General Motors. Click here to view