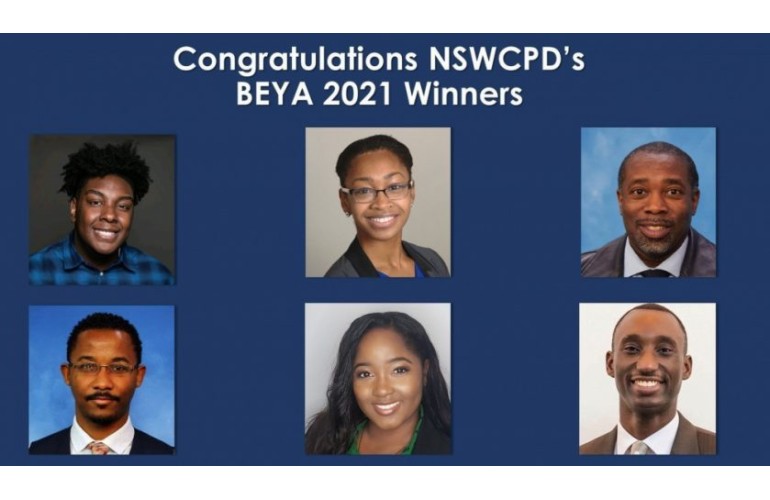 The Naval Surface Warfare Center, Philadelphia Division provides cybersecurity for ship systems. The division employs about 2,700 civilian engineers, scientists, and technicians who do research and development, test and evaluation, acquisition support, and in-service and logistics engineering for the non-nuclear machinery, ship machinery systems, and equipment for all Navy surface ships and submarines.

While this was the first group of award winners at BEYA,  the Naval Surface Warfare Center, Philadelphia Division has recruited at the science, technology, engineering, and math (STEM) job fair for years.

During the 2017 BEYA STEM Conference, Yaseen Farooq, a program manager in the division’s Naval Innovative Science and Engineering, recruited Fred Williams, now a data manager in logistics product readiness, and a winner of the 2021 Modern-Day Technology Leader award.

“This award kind of brings things full-circle for me,” Williams said in a statement. “I was attending the conference with a friend and had a few job offers on the table, but I was approached by Yaseen, and after talking to him I changed my plans and accepted a position at NSWCPD.”

Williams has spent the last three years providing engineering and logistics support to the fleet and implementing automated processes. Williams also volunteers as a mentor for several STEM programs, facilitates workshops for college students, and recruits for the command.

“I’m starting down the path of being a role model and I want to help others achieve success in their fields and mentor students who haven’t found one yet,” Williams said.

Farooq has served as a recruiter at BEYA for five years. He was recognized with a 2021 Science Spectrum Trailblazer award for his work on the college recruitment team and his role in enhancing diversity. The Science Spectrum Trailblazer award honors men and women actively creating paths for others in science, research, technology, and development. They distinguish themselves by constantly setting their sights higher, striving to innovate, and open doors for others.

Farooq was nominated for the award, in part, for his passion for volunteering in STEM outreach programs and his outreach efforts with local schools, as well as for his role in mentoring students in internship programs at the Naval Surface Warfare Center, Philadelphia Division. He has also served as chairperson for the Equal Employment Opportunity Advisory Committee, is involved with the Survey Committee for the division’s Defense Equal Opportunity Management Institute Organizational Climate Survey, and is an active member of the division’s African American Employee Resource Group.

“It is an honor to me to be recognized by BEYA and nominated by Philly,” Farooq said. “I’ve always wanted to win an award from BEYA; they are an organization I have a lot of respect for.”

“I volunteer because I want to give back and define direction to our youth. I was encouraged to try STEM and I found my passion. I want to be that person to bring the next generation into STEM,” Farooq said.

Chedric Waters, a ship controls and surface combatants branch head, sees a Modern-Day Technology Leader as “an individual that can remain fluent and competent with the times, and someone that can navigate and bridge the gap between the generations,” adding that there are currently three generations in the workforce with three different mentalities and work ethics. “Bridging those gaps and staying fluent and competent in all the tools available will bring success,” he said. As work has gone digital since the COVID-19 pandemic Waters has continued to lead his team while providing services encompassing multiple combatant ship classes. The leadership of his branch has resulted in a safer and more reliable fleet.

“It is extremely humbling to be acknowledged for impacting those around me,” Waters said. “Being recognized by my supervisors and peers is an indescribable feeling.”

Chelsea Kpodi said BEYA’s message resonates deeply with her as a Black woman. “I hope to further promote STEM to minorities,” she said.

The littoral combat ship machinery control systems lead systems engineer, and 2021 Modern-Day Technology Leader Award winner, has spent her career implementing lean processes and increasing accountability in her branch and across the command. In her current role, she is responsible for implementing system engineering processes to manage risk, cost, and effort. She has developed automated tools using NSWCPD’s collaborative digital environment and has enhanced accountability through improving systems, processes, and metrics tracking.

“I’m proud to be a front runner in Code 50 (Cybersecure Hull, Mechanical & Engineering Control Systems & Networks Department) using existing tools and finding new ways to use them. We have a lot of processes here so I’ve spent my career becoming an expert for these in my team,” Kpodi said.

Muhammad has been instrumental in several projects resulting in a safer, more reliable fleet. His support of the chilled water system and electro-mechanical actuator team resolved obsolescence issues across several surface ship classes. As the sonar dome pressurization system inspector for the inspection and survey teams, he uncovered potential risks and helped plan the timely delivery of replacement parts to keep the inspection timeline on track. Since the beginning of the COVID-19 pandemic, Muhammad has continued his crucial role, finding new ways to provide support to the Sailors remotely.

“This award lets me know that there is so much more to be done. People have done so much for me that it gives me great inspiration to give back and to chart a course and lead,” Muhammad said. “It let me know that I’m on the right track in doing what I love in STEM.”

Taylor Jánae Million, DDG Modernization Back Fit Project Lead, has only been with NSWCPD since September 2019 but has made an impact on the DDG-51 Integrated Bridge Control Program. She implemented a new Scrum agile framework for the DDG-51 Systems Engineering Process and Software Delivery process that increased efficiency and accountability by effectively tracking deliverables and productivity metrics. This new process reduced the team’s time inefficacies generating thousands of dollars in savings with each delivery.

“Being a Modern-Day Technology Leader means a lot personally. I’ve always aspired to innovate. I’ve always had a passion for creation. This really reinforces that passion of mine to find different ways to pursue continuous improvement,” Million said.