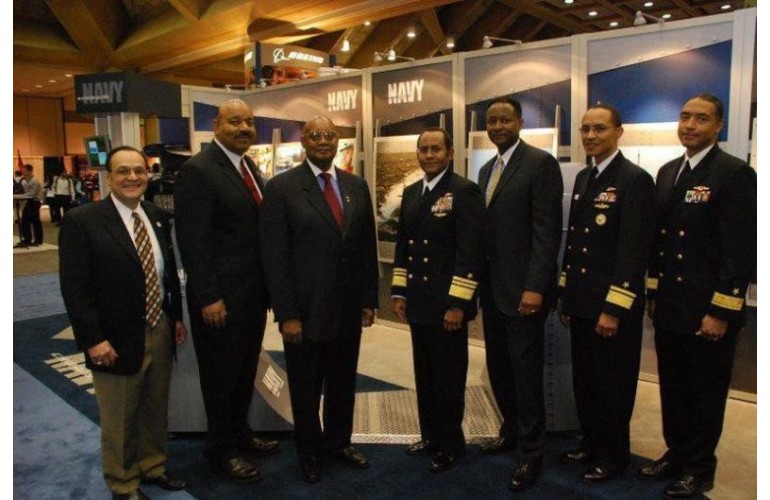 C.A. “Pete” Tzomes, the first African American to command a nuclear-powered Navy submarine in 1983, passed away this week, according to reports from the Centennial Seven,  a group of black commanding officers. Tzomes had been in hospital in Iowa City awaiting treatment for leukemia. He is survived by his wife Carolyn, son, Chancellor, and granddaughter, Mariana.

“Pete Tzomes hosted a final teleconference with six of the 7 members of the Centennial 7 on June 1, 2019,” the obituary read.  “Only Joe Peterson could not be reached. With Pete as our leader, you would be hard pressed to find 7 other submarine skippers (at random) that continued to do okay… beyond submarine command. Pete Tzomes signed the photo about one week ago. We honor and respect CAPT (ret) Pete Tzomes.”

Since the United States Submarine Force was established in 1900, only seven African Americans had held command of a submarine by the year 2000, which marked the first one hundred years (Centennial) of U.S. Submarine Force history.

The Centennial Seven are:

“It’s impossible for any human being to know what it felt like to be submerged hundreds of feet underwater for more than 60 days at a time when you were the only African- American officer… In addition to having to be a nuclear engineer, physicist, chemist, electrician, navigator, restaurant manager, weapons specialist, sailor, and leader, you dealt with the added dimensions of the pressures of being the only one…John Paul Jones said in the 1770’s: ‘It is not enough that an officer be a capable mariner. He must be that of course but also a great deal more.’ 249 years later, that’s not only still true; that’s also Pete. Standing watch and preparing reports as late as this morning. He served; he was the first. No one will ever have any idea how hard that was, except Pete. That’s Pete being Pete.” — Tony Watson

While serving as commander of the Recruit Training Command, Great Lakes, one of the Navy’s boot camps, Capt. C.A. “Pete” Tzomes won the Black Engineer Award for Affirmative Action in 1991.

According to “Black Social History blog’s “The story of the Navy’s first African American submarine commanding officer” by Mass Communication Specialist 2nd Class Patrick House, Tzomes got his commission in the 1960s and entered the submarine field.

After 12 months of nuclear-power training and six months of submarine training, he reported to the “blue crew” of the ballistic missile submarine USS Will Rogers (SSBN 659) in February 1969. Fourteen years later, he was assigned to the pre-commissioning unit of the fast attack submarine USS Pintado (SSN 672). In December 1970, he served in division officer billets until completing his engineering officer qualification.

In April 1973, Tzomes was assigned as an engineering officer aboard USS Drum (SSN 672), where he served until August 1976. From September 1976 until September 1979, he was assigned to the nuclear propulsion examining board on the staff of then-Commander in Chief, U.S. Pacific Fleet at Pearl Harbor. In November 1979, he reported as executive officer aboard USS Cavalla (SSN 684), where he served for almost three years.

In May 1983, close to 30 years after Rosa Parks was arrested for refusing to give up her seat on a bus for a white man, Tzomes reported for duty aboard USS Houston (SSN 713) as the first black commanding officer of a nuclear-powered submarine.

As the centennial of the submarine force grew close, the group of commanding officers had grown. There were now seven.

It was this realization that led to the phrase “centennial seven” to describe the men who had achieved something great. Joining Tzomes in the honor is Rear Adm. Bruce Grooms, Rear Adm. Tony Watson, Capt. Will Bundy, Vice Adm. Mel Williams, Capt. Joe Peterson, and Adm. Cecil Haney. Today, the seven African American commanding officers take time out of their schedules to mentor young sailors.

We will miss Pete at our church in Rock Island. Truly a great man who served his country and his God! Rest in peace brother Pete! Herbert & Deborah Taylor

It will be a very sad time for the Navy family that Pete has inspired. My husband served under Pete and to this day talks highly of the accomplishments set by this amazing man. My deepest sympathies to his family.

I first met Commander Tzomes in 1983-1984. Our sons were classmates and good friends in high school. He invited me to tour the U.S.S. Houston and gave me signed copy of the boat. This was a very special connection to him and history. Thank you for your friendship. I’m sure that you’ll be missed.

It was my pleasure to have known Pete through NNOA. He was a great leader and a mentor to soo many. He will be missed.

I was part of the Houston crew when the Capt took over. What an extremely personable and friendly guy! He acted like part of the crew instead of just the CO. A group of us kept up with him since then (mostly through Dominick Ceglio). What an honor and privilege is was to serve with and be associated with Capt Tzomes.

He is also survived by his only son and namesake, Chancellor Tzomes and his only granddaughter, Mariana Tzomes. It’s sad that they were not mentioned in the obituary, since they are his blood family.

It would have been appropriate to mention his only child and namesake, Chancellor Tzomes and his granddaughter, Mariana Tzomes. His only living blood relatives.

Fair winds and following seas, XO. You taught me to always strive for excellence.

I served as lead Yeoman directly under Commander Tzomes on the USS Cabala. He was a great XO. He will be missed.

I first met Pete when he was a lieutenant Jg on the USS Pintado at that time I was on the USS Trigger and we were in Yokuska Japan in 1972 there was a Chief Tolbert stationed at the group who would come down to the boats and pick the brothers up and bring us over his house and that’s when I first met Pete. In the early 80s I met Pete again when he was XO of the USS Cavalla out of Pearl in 1981. He was the guest speaker at our first Black History month celebration and lastly when he was CO USS Houston out of San Diego..I was SSEP Groom Team and groomed his Sonar suite prior to the boats deployment. So we knew each other some 15 years….Rest your oars shipmate ….Job well done.
Aumont Phipps
STS1/SS Ret.

To the family and friends of Pete Tzomes: I grew up with Pete , his brother and mother and father. Although I am older I knew as a young boy who loved to learn. One of his classmates in Junior high school told me that Pete expressed his interest to join the Navy., his teacher replied, “you will never make it” That made Peter prove him wrong. It was known in the Black community that we were not accepted as an enlistee in the Navy. An appointment to the Naval academy was out of the question. Jobs for blacks were limited. Our parents encouraged us to get an education. Ironically one of Pete’s neighbor completed Temple Dental school and joined the Navy as a dentist. Peter made us proud as a History Maker. When he came to Williamsport several years ago in the summer I stayed in contact with him several years afterwards. Peter Tzomes was a remarkable man. I am blessed that I grew up with him and his family.

My husband, Bill, and I have the fondest memories of Capt “Pete” as friends who loved played Bid Whist whenever we could while we were both stationed at GLAKES. He was a great giant of integrity, character, Faith, and wit. He was extremely intelligent and a role model I truly admired. I am so glad he had his lovely wife Carolyn, son Chancellor, and grandchild to fill his retired life with joy.
BZ, Captain; We salute you and know you’re with Jesus now!
Much Respect Eternally, Judith & Bill

I served with Mr. Tzomes in M Division on the Will Rogers. We had a few discussions several years ago. I had hoped that he had gotten his flag. I can’t believe that he passed; we called him the nuclear ping pong ball, because he was so full of energy all the time.

Pete was a fellow Midshipman at Annapolis, and one of 9 Afro-American Midshipman, out of 4,000, at The US Naval Academy, in 1964. He was from Williamsport, Pennsylvania, and I was from Monessen, Pa. I was glad to communicate with him after 50+, Years. He was a fighter to the end. My condolences to the Family. Rest In Peace,
My Friend.

Commander Tzomes was one of the most personable, friendly and professional leaders i’ve ever had the honor to serve with. I extend my deepest condolences to his family.

I served under Commander Tzomes for 3 years on the USS Houston. I was a first class petty officer. He was very tough on the crew, especially the officers, but if you earned his trust, he was very good to you. I was lucky, he liked me. I’m sad that he is gone.

Today as I was going through some files I ran across one of my boot camp books when I was a Company Commander at Great Lakes. So I googled Captain Pete and found out just today of his passing.
I served under Captain Pete Tzomes from 90 to 92 what a wonderful leader and all around great person.

He will be missed.