‘Onward and Upward’ as NASA’s 14th administrator is Sworn In 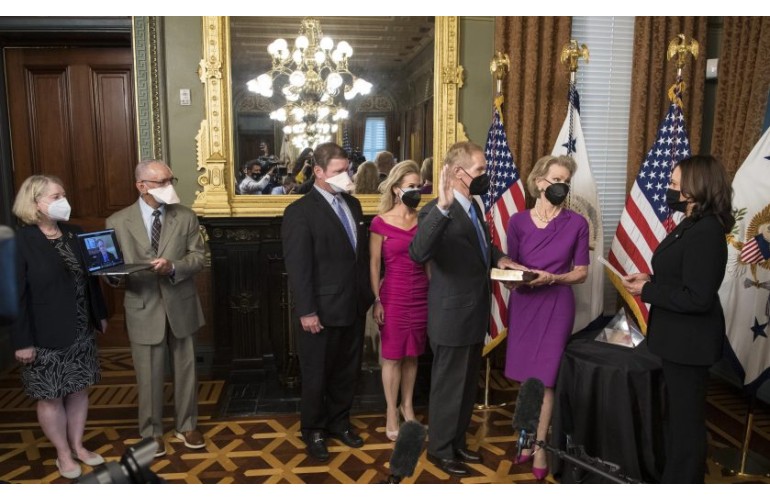 Former Senator Bill Nelson was ceremonially sworn in as the 14th NASA Administrator by Vice President Kamala Harris on Monday, May 3 at the Ceremonial Office in the Old Executive Office Building in Washington D.C.

In January 1986, Nelson became the second sitting member of Congress to fly in space when he served as a payload specialist on the Space Shuttle Columbia. Before entering politics he served in the U.S. Army Reserve during the Vietnam War.

In the U.S. Senate, he served as Ranking Member of the Senate Commerce Committee for four years. In May 2019, Nelson was appointed to serve on NASA’s advisory council.

On March 19, President Joe Biden announced his intention to nominate Nelson to lead the National Aeronautics and Space Administration. Nelson was confirmed by unanimous consent by the United States Senate on April 29, and sworn in by Vice President Harris on May 3.

Nelson appeared before the Senate Committee on Commerce, Science, and Transportation, Wednesday, April 21 in Washington D.C.

After his U.S. Senate confirmation as the 14th administrator of the National Aeronautics and Space Administration, Nelson said: “I am honored by the President’s nomination and the Senate vote. I will try to merit that trust. Onward and upward!”