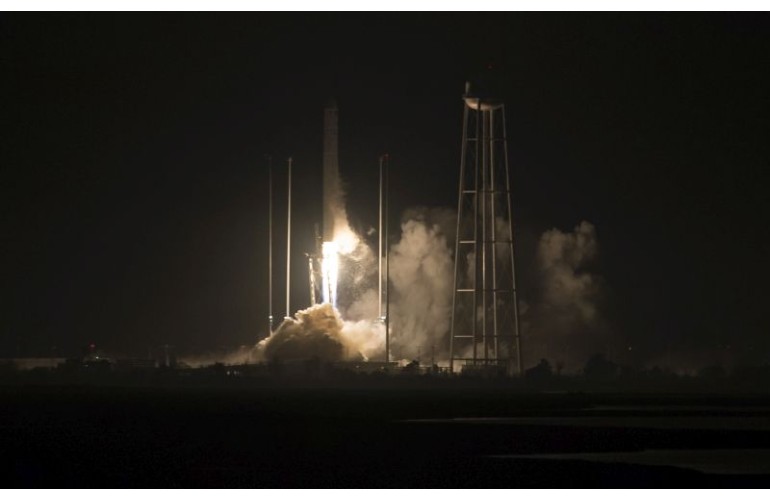 The Orbital ATK Antares rocket, with the Cygnus spacecraft onboard, launched from Pad-0A, Monday, May 21, 2018.

At the time of launch, Orbital ATK’s ninth contracted cargo resupply mission with NASA to the International Space Station was traveling at an altitude of about 250 miles.  (Photo Credit NASA/Aubrey Gemignani)

Loaded with 7,400 pounds of supplies and payloads, the International Space Station-bound Cygnus lincludes critical materials to support dozens of the more than 250 science and research investigations that will occur during the space station’s Expeditions 55 and 56.

The cargo ship will rendezvous with the International Space Station on Thursday, May 24.

Expedition 55 Flight Engineer Scott Tingle will grapple the spacecraft, backed by Ricky Arnold, and Drew Feustel will monitor Cygnus systems during its approach. They will use the space station’s robotic Canadarm2 to take hold of the Cygnus, dubbed the S.S. James “J.R.” Thompson.

After Cygnus’ capture, ground controllers will command the robotic arm to rotate and install Cygnus onto the station’s Unity module. It is scheduled to depart the space station in mid-July.

Science investigations aboard Cygnus on their way to the space station also include commercial and academic payloads in myriad disciplines, including:

The Biomolecule Extraction and Sequencing Technology, an investigation to identify unknown microbial organisms on the space station and understand how humans, plants, and microbes adapt to living on the station.

The Cold Atom Laboratory, a physics research facility used by scientists to explore how atoms interact when they have almost no motion due to extremely cold temperatures.

A unique liquid separation system from Zaiput Flow Technologies that relies on surface forces, rather than gravity, to extract one liquid from another.

The Ice Cubes Facility, the first commercial European opportunity to conduct research in space, made possible through an agreement with ESA (European Space Agency) and Space Applications Services.

RainCube (Radar in a CubeSat) will be NASA’s first active sensing instrument on a CubeSat that could enable future rainfall profiling missions on low-cost, quick-turnaround platforms.

TEMPEST-D (Temporal Experiment for Storms and Tropical Systems Demonstration) is a mission to validate technology that could improve our understanding of cloud processes.

CubeRRT (CubeSat Radiometer Radio Frequency Interference Technology) will seek to demonstrate a technology that can identify and filter radio frequency interference, which is a growing problem that negatively affects the data quality collected by radiometers, instruments used in space for critical weather data and climate studies.