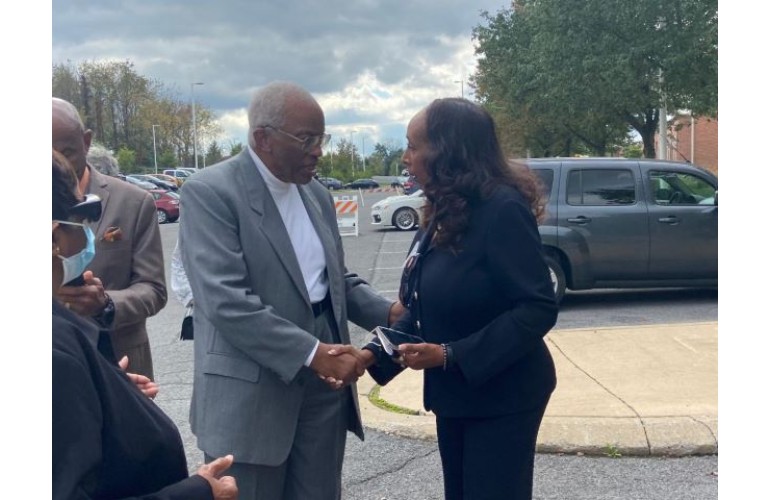 According to Penn State News, Bluford, who earned his undergraduate degree in aerospace engineering in 1964, received multiple honors from his alma mater.

The first event took place on Oct. 6., where Bluford was recognized for his “exceptionally meritorious and superior service to the United States Air Force and the National Aeronautics and Space Administration over 29 years,”

On Oct. 8, Innovation Boulevard at University Park was named in honor of Bluford in an invitation-only ceremony. Among the guests was Dr. Sheila Brooks, founder, president, and CEO of SRB Communications.

Brooks wrote in a newsletter of her close relationship with the Bluford family after writing a book about trailblazing journalist Lucile Bluford, an aunt of Guy Bluford Jr. Brooks said she and the SRB production team traveled to Penn State to record and attend the building naming ceremony. (Photo above courtesy of SRB Communications).

The building houses the Center for Innovation Metal Processing through Direct Digital Deposition, a collaborative effort between the Applied Research Laboratory, the College of Engineering, and the College of Earth and Mineral Sciences. The center facilitates the research and development of several additive manufacturing systems for the benefit of broad academic, government, and industrial projects, as well as a state-of-the-art design studio and prototyping laboratory.

The ceremony included remarks from Amy Pritchett, head of the Department of Aerospace Engineering; Nick Jones, executive vice president, and provost; Justin Schwartz, Harold and Inge Marcus Dean in the College of Engineering.