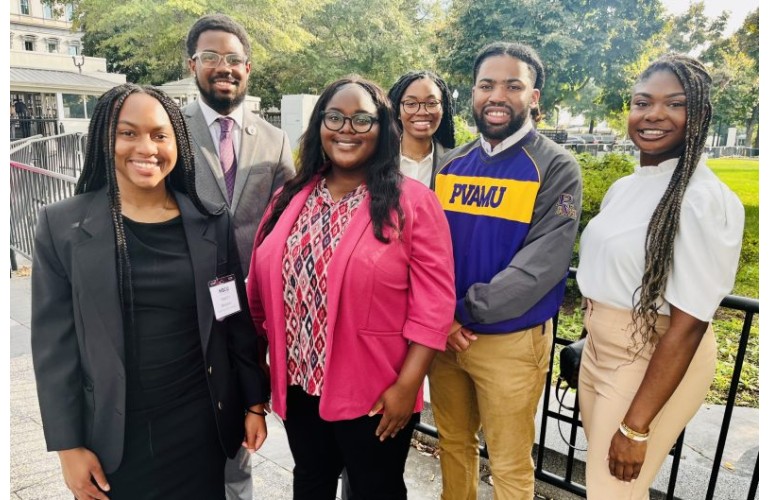 Eight Prairie View A&M University (PVAMU) scholars were among dozens from 56 historically Black colleges and universities selected to attend the HBCU Week Conference. This was the first time PVAMU students attended the conference.

According to Quincy Moore III, Ph.D., director of PVAMU’s Honors Program, the conference was a fantastic opportunity. “Being present at this conference positioned the students to engage with executives, administrators, and government officials,” he said in a statement.

“Our students conversed with members of Congress, received professional development, participated in a NASA pitch competition, toured Capitol Hill, were invited to the White House, attended multiple networking events, and most importantly, had an opportunity to learn,” Dr. Moore said, adding that the conference represented “a continued effort to increase opportunities for students to network with government, public and private corporations,” Moore said.

“I thoroughly enjoyed my time in Washington,” Henderson said in a statement. “As this year’s current WHI HBCU Scholar, it was a pleasure meeting and forming bonds with other high-achieving HBCU students. Although the experience was compacted with a lot within a few days, it revealed to me how much I’ve grown since stepping foot at my university.”

The annual conference is organized by the White House Initiative on Advancing Educational Equity, Excellence, and Economic Opportunity through Historically Black Colleges and Universities.

“The HBCU Week Conference is one of the largest events bringing together thousands of HBCU constituents,” said Elyse Jones, outreach and engagement coordinator for the HBCU Scholars Program. “This event serves as a forum to exchange information and share innovations among and between institutions. Stakeholders, which include students, faculty, federal agencies, private sector companies, and philanthropic organizations, provide an overview of successful engagements that, if replicated, could improve instruction, degree completion, and the understanding of federal policies that shape and support higher education.”

Senior chemistry major Trinity Brigham enjoyed engaging with other HBCU students. “I connected and interacted with many like-minded individuals,” she said. “Coming to PV, I never thought I would get experiences like this, and I am so grateful to Dr. Moore and the Honors Program for the opportunity.”