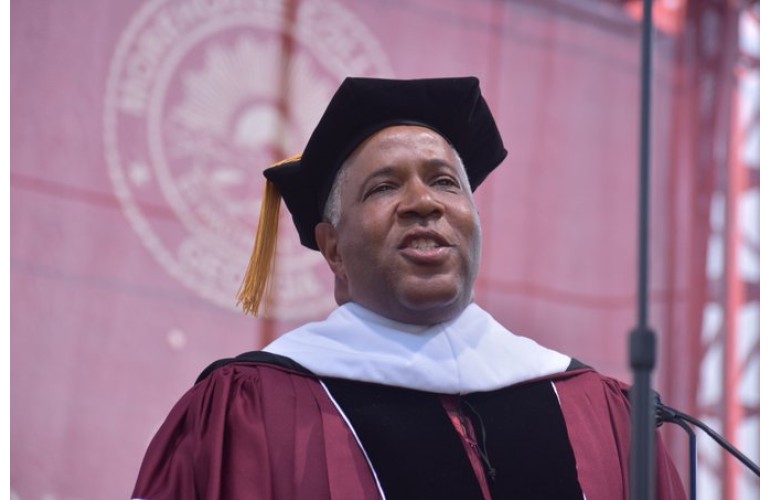 “My family is going to create a grant to eliminate your student loans!” -Robert F. Smith told the graduating Class of 2019.

“On behalf of the eight generations of my family that have been in this country, we’re going to put a little fuel in your bus. This is my class, 2019. And my family is making a grant to eliminate their student loans,” Smith said. (Watch on YouTube).

“There are those who dismiss our brothers and sisters as not having the training or the skills to take part in this Fourth Industrial Revolution, the 21st-century tech-based economy. This is not true and this belief is not acceptable,” Smith said at the 135th Commencement exercises at Morehouse College on Sunday.

After graduating with a chemical engineering degree from Cornell University, Smith earned an MBA from Columbia Business School with a concentration in finance and marketing. He worked at Kraft General Food before joining, in 1994, tech investment banking.

“Technology is creating a whole new set of on-ramps to the 21st-century economy,” Smith said Sunday. “Together we will help assure that African Americans will acquire the tech skills and be the beneficiaries in sectors that are being automated.”

Smith is the founder, chairman, and CEO of Vista Equity Partners, which manages equity capital commitments of over $46 billion and oversees a portfolio of over 50 software companies that employ over 60,000 people worldwide.

Smith is also the founding director of the Fund II Foundation, a nonprofit organization working to advance social change and preserve African-American culture, human rights, music education, the environment and American values such as entrepreneurship and innovation.