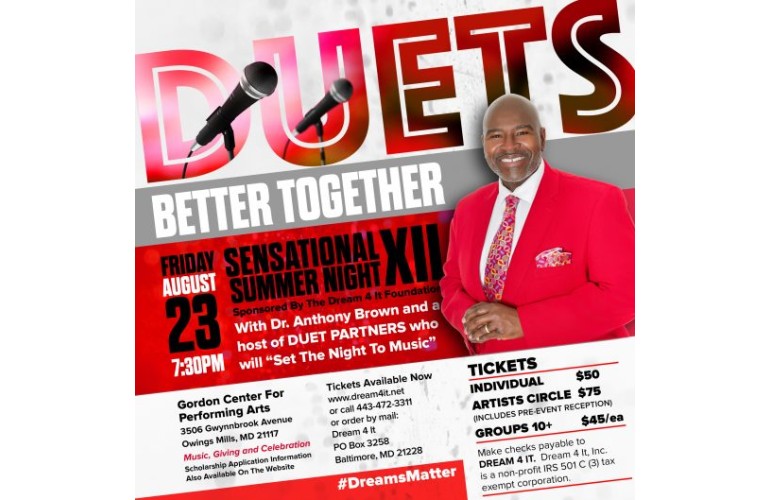 On cue, Dr. Anthony Brown gave a stirring rendition of his song “Dream” in an unforgettable countertenor. He’d written the lyrics in 2008 to motivate himself after a change in responsibilities that found him wondering what was next on his life’s journey.

After writing the song, Brown had the vision to share the message of hope with friends in a summer garden concert, but his producer thought the song could go beyond one summer night to help motivate the next generation.

Born and raised in Baltimore, Maryland, Brown, the second of four children, graduated from Woodlawn High School in 1980. After earning both a bachelor’s and master’s degrees from Towson State University, he rose to director of communications for Maryland’s Mass Transit Administration (MTA), directing media, PR, and marketing activities.

Brown was also a passionate Gospel singer, notching up several successful tours across Europe as a member of an All Saints Roman Catholic Church Choir.  He has also released solo CDs of hymns, Christmas and praise and worship music.  In May 2002, he earned a Master of Divinity degree from the Virginia Union University School of Theology and was ordained into the ministry. He earned a Doctor of Ministry degree from Ashland Theological Seminary in 2010.  Currently, Dr. Browns holds a full-time ministry position at the Morning Star Baptist Church in Catonsville, MD. He works closely with the Pastor on the overall promotion and development of the Church’s ministry programs.

After that impromptu concert in 2008, Brown and his producer found they had raised enough money to give three scholarships, totaling $750.

To date, the organization has given out seventy scholarships totaling $140,000. The  Dream 4 It Foundation will hold its 12th annual benefit concert on August 23rd, 2019.

“It’s been quite a journey,” Brown said humbly.

What started as Sensational Summer Night I—musical content with all gospel music—had an efficient and dedicated board of governors in place to help operate Sensational Summer Night 2 and 3. About year four or five, the organization was granted its 501(c)(3)  designation, which applies to entities that are organized and operated exclusively for religious, charitable, scientific, literary, or educational purposes. Coming up on year 12, the annual fundraiser averages $16,000.

The fundraiser, membership drives, and donations have made a huge difference.

In 2019, Dream 4 It beneficiaries are applying for medical school; are in medical school. At least one is an attorney who’s passed the Maryland Bar. They are also teachers in the Baltimore County school system, and engineers. One of them even started his foundation to help students like himself from single-parent households cover the cost of college.

Brandon Foster, a biological sciences and music (viola) performance graduating senior at Carnegie Mellon University (CMU), was encouraged to apply for a Dream 4 it scholarship by his parents when he was a senior in high school.

“The scholarship helped make attending school much more comfortable and allowed me to pay for summer classes,” Foster said in an email.

He plans to do biomedical research at the National Institutes of Health (NIH) and learn about health disparities as a part of the NIH Academy Enrichment Program. Foster will also apply for medical school in 2020.

Other Dream 4 It success stories include Margo Huffman, a 2018 physiology and neurobiology graduate from the University of Maryland; Ona Ichoku, who also graduated in 2018, from  CMU with a major in biological sciences and a minor in biomedical engineering; and Glenae Williams, a 2014 Industrial Engineering graduate from Morgan State University.

“The Brown family has a strong presence at my church and with my family,” Williams said. “I heard of the scholarship from other church-school members who were recipients. Dr. Brown recognized my dreams and challenges I faced to transition to college and offered me assistance and resources. Not only financial assistance but a network of likeminded adults  and access to plenty of wisdom.”

Dream 4 It alumni generally came across the foundation while they were searching online for college scholarships; they’re grateful to have had the financial support from Dream 4 It for their undergraduate education. The scholarship money has been a big help with the financial burden of college, giving them time to focus on continuing their education and pursuing their goals.

The organization is also large enough to give more students scholarships than it did in 2008, but it is still a small town enough to offer a personal touch as an invaluable networking resource.

“At the annual “Gobble Gobble” in 2016, I met another Dream 4 It scholar, Ona Ichoku, who was also a bio major at CMU that was a year ahead of me,” Foster said. “She gave me great advice about classes based on her own experiences, and we would always have nice conversations from then on whenever we ran into each other on campus,” he added.

Huffman, the first in her family to graduate from college, feels lucky to have had support from her family. She has been accepted into medical school and will begin this August at the University of Maryland School of Medicine.

“I may be interested in pursuing psychiatry,” she said. “But I am open to exploring different fields and seeing where the experience takes me. I can’t wait to become Dr. Huffman and have the chance to help improve the health of others.”

Ichoku heard about Dream 4 It through her mother,  who saw an announcement about the scholarship on TV.

“Dream 4 It has truly been an amazing resource and support,” she said. “Not only did they provide me with a scholarship to help with some college expenses such as textbooks, school supplies, etc., they also provided me with a cohort of talented individuals and scholars. Through the organization, I have been able to connect with other minorities in the STEM field that I would not normally have known. I have gained a network of future leaders, innovators, and problem solvers, but more than that, a network of friends.”

Ichoku is working as a researcher in the biotechnology industry. Williams plans to seek fulfillment in her engineering career and outreach to others who are interested in science, technology, engineering, and math  (STEM) degrees.

Morgan Taylor is a rising second-year Ph.D. student at Duke University with a focus on Cognition and Cognitive Neuroscience.

“After witnessing my grandmother’s struggle with Alzheimer’s disease, I became fascinated with learning more about the brain and how memory functions within it. In graduate school, I aim to study how memory and decision-making processes change during older adulthood and use this knowledge to inform future Alzheimer’s disease research.

My parents and I attended the annual Sensational Summer Night concert one year and learned about the organization and its mission there. I was inspired by the scholars and their stories and knew I wanted to apply during my senior year of high school.

The scholarship I received from the organization helped me immensely; it allowed me to purchase my first laptop and my textbooks for the first semester of college.

As I am just finishing up my first year of graduate school, my immediate goals are to continue with my studies and earn my Ph.D. within the next 4-5 years. Afterward, I hope to become a researcher at the National Institutes of Health (NIH).”