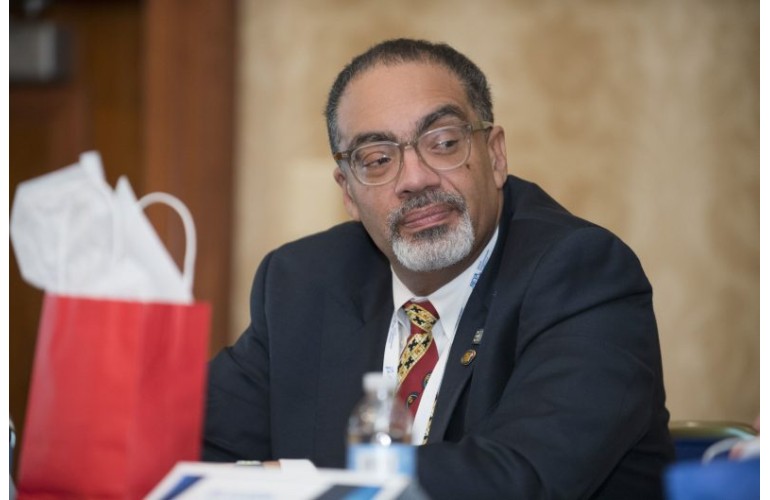 Victor R. McCrary, vice president for research and economic development at Morgan State University, is being recognized as the “2017 Distinguished Alumnus of the Howard University Graduate School” on Thursday, May 11. McCrary earned a doctorate in physical chemistry from Howard University in 1985.

Dr. McCrary, who won a 1990 BEYA in the Most Promising Engineer category, organized the world’s first conference on electronic books in 1998.

His research group developed a prototype of the electronic book reader, and a low-cost Braille reader for electronic books, which received a 2001 R&D 100 Award. The standards development opened the door for today’s Kindle and iPad readers and the e-book industry.

Dr. McCrary credits these innovations to his student program at National Institute for Standards and Technology, where his division employed and mentored over 40 students ranging from 14 years old to 22 years old. Many have gone on to careers in science, engineering, and law. In 2000, Dr. McCrary was awarded the U.S. Commerce Department’s Gold Medal for the development of standards for electronic books.

He also served on advisory boards for the University of Puerto Rico, University of Massachusetts, and Mississippi State University. Additionally, he created partnerships between APL and historically black colleges and universities (HBCUs) and worked with the Navy on a program to increase the participation of HBCUs and Hispanic-serving Institutions on U.S. Navy contracts.

Dr. McCrary served as president of the National Organization of Black Chemists and Chemical Engineers (NOBCChe) from 2007-2013. During his presidency, he forged a partnership between NOBCChE and the American Chemical Society, and established the Technology Education Partnership program with the chemistry departments of several major universities; e.g. the University of Maryland, University of Oregon, Massachusetts Institute of Technology and Auburn University to name a few.

In 2011, he was honored as Scientist of the Year by the BEYA-STEM Conference in Washington, D.C.

In 2012, he led the effort to establish the Coalition of Hispanic, African, and Native Americans for the Next Generation of Engineers and Scientists (CHANGES). Since 2012, Dr. McCrary has served as Morgan State University’s Vice President for Research and Economic Development. McCrary came to Morgan after several years at Johns Hopkins University’s Applied Physics Lab where he served as its manager of emerging technology and innovation.

He also serves on numerous committees including the subcommittee for the U.S. Air Force Institute of Technology, the Intelligence Science and Technology Experts Group of the National Academies of Science, Engineering and Medicine, the advisory board for electrical and computer engineering at The Citadel, the board of the Maryland Innovation Initiative of the Maryland Technology Development Corporation (TEDCO), and the PubMed Central National Advisory Committee for the National Institutes of Health.

Dr. McCrary is a member of the National Science Board’s Class of 2016 – 2022. The NSB is made up of 25 members appointed by the President. Members serve six-year terms represent a variety of science and engineering disciplines and geographic areas.