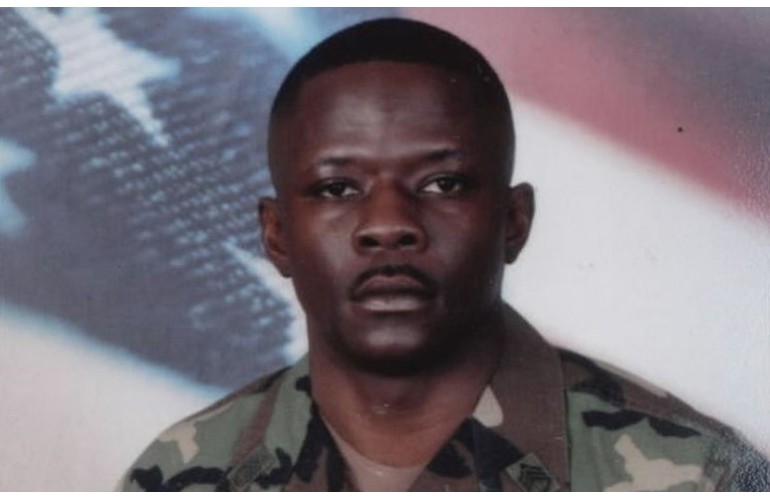 Army Sergeant Alwyn C. Cashe has posthumously received the Medal of Honor, the first Black servicemember to receive the highest award for valor since the Vietnam War. “And for the family of Sergeant First Class Alwyn Cashe,  this has been 16 years in coming,” President Joe Biden said during his remarks at the Presentation of the Medal of Honor ceremony. Read excerpts below.

“Representative Murphy, Representative Waltz, thank you for your efforts — your continued efforts — along with the team.  And Sergeant Cashe’s commanders, commander-in-arms, his medical team, and the family who worked with such dedication over so many years to make this recognition possible.

October 17th, 2005, Sergeant Cashe was commanding a Bradley fighting vehicle on night patrol in Iraq.  They came under enemy fire.  An improvised explosive device detonated, igniting the vehicle’s fuel and engulfing it in flames. Sergeant extracted himself and, without hesitation, turned back to the vehicle to help free the driver and extinguish flames on the driver. In the process, Sergeant First Class Cashe’s uniform — drenched in fuel — caught fire, causing severe burns.  The patrol was still taking enemy fire, but Cashe thought only of his fellow soldiers trapped in the troop compartment. So he pushed his own pain aside and returned to the burning vehicle as his — and pulled four soldiers free — four more.  At this point, with the second- and third-degree burns covering almost 75 percent of his body, his uniform mostly — mostly burned away, the Sergeant saw there were still two soldiers and their interpreter unaccounted for. So he went back into the inferno for a third time and got everyone out of that inferno.  That was his code.  And his love for his 3rd Infantry Division ran deep.  No soldier was going to left — be left behind on his watch.  And when helicopters began to arrive, he insisted that his troops be evacuated before he would go.

Later, at Brooke Army Medical Center in Texas, where he and other members of his team were taken for treatment, when he regained the ability to speak, his first thoughts were for his units.  He asked, first thing, “How are my boys?”  “How are my boys?”

Alwyn Cashe was a soldier’s soldier — a warrior who literally walked through fire for his troops.   Sergeant succumbed to his injuries on November 8, 2005, surrounded by those he loved and who loved him.  He was a hero.  He was a beloved son and brother, a proud husband, and a father of three children.

Sergeant Cashe and his family gave everything for our country.  Their devotion to his memory and their years working to make sure that his courage and selflessness were properly documented and honored is a testament to the love that he inspired and the legacy he left behind. Sergeant First Class Cashe is now the seventh individual to receive the Medal of Honor for his actions in Operation Iraqi Freedom and the first African American to receive it since the Vietnam war.”