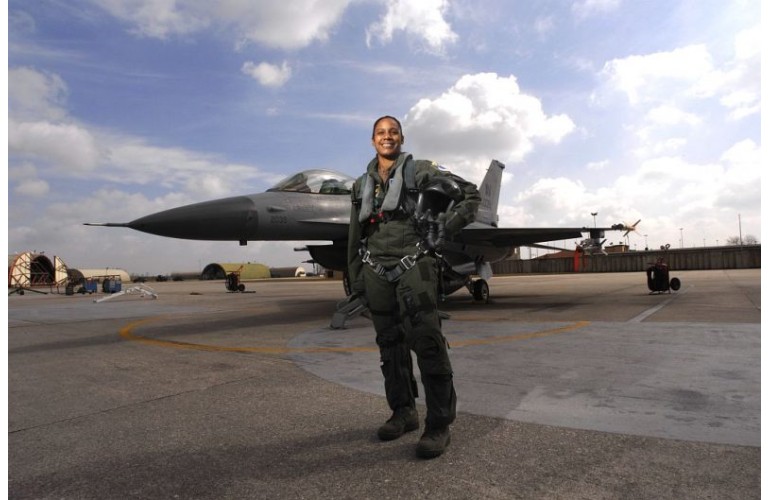 While in kindergarten, Shawna Rochelle Kimbrell decided she wanted to become an astronaut, so she wrote a letter to NASA asking how she could join the program. But as she got older she “started to look at the jets and flying fighters” in Colorado, where she grew up.

By the time she was in fourth grade, she knew she wanted to be a fighter pilot. So, she joined the Civil Air Patrol, worked at air shows and earned her private pilot’s license. Eventually, she was accepted into the Air Force Academy. She did all of this despite people telling her as a child that there were no female fighter pilots.

Kimbrell graduated from the Academy in 1998 and was accepted into pilot training. She earned her pilot wings in August 1999.

Kimbrell was born in Lafayette, Indiana to Guyanese parents. Her mother and father, who are naturalized U.S. citizens, moved to America for education and opportunities. Their hard work paid off in her father earning a degree from Howard University and a doctorate from Purdue University, which in turn earned him a job offer in Parker, Colorado.

During her career she has flown combat sorties in Operation Northern Watch. She has also been stationed at bases in Japan, South Korea, Italy, Fort Stewart, Ga.; and Nellis Air Force Base, Nev, where she served as the course manager for the Air Liaison Officer Course teaching pilots how to work with the Army in air-to-ground integration.

While off duty, she finds time to speak to children.

“I literally see the lights turn on in kids’ eyes when I talk to them when they realize that someone like me can go do something as cool as (being a fighter pilot),” Kimbrell told Air Force News in 2012. “It’s really awesome to be able to go out and talk to them and have them light up and say, ‘I’ve heard people say that you can do whatever you want, but now I can put a face to the story and I can see that it can be done, which means I can go out and do whatever I want to do.’ That is what I focus on and what I think is really important.”

Mr Towner, Shawna was the first black fighter pilot due to her graduation from training in 1999. Christina was several classes behind her graduating in 2000, but Christina went to combat first. They should both be celebrated.