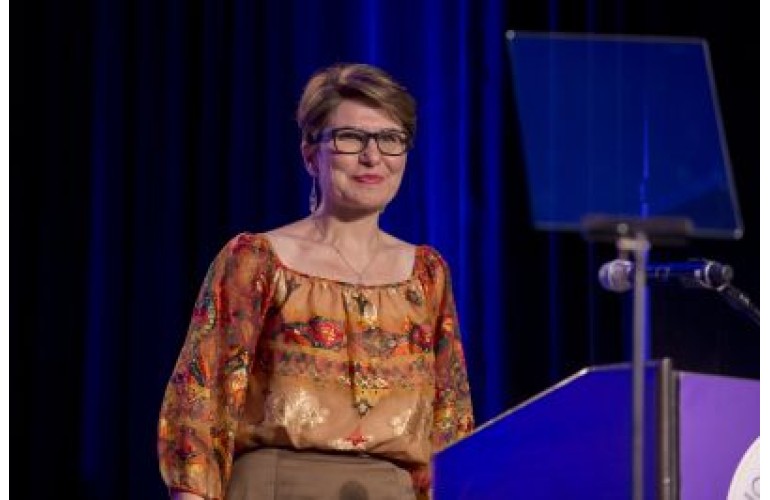 Over a 30-year career, Sepahban worked in aircraft as well as manned and unmanned space systems at Northrop Grumman, the NASA Johnson Space Center, Lockheed Martin Corporation, and a French aerospace company.

The multicultural, trilingual daughter of immigrant parents, who grew up on three continents, gave the audience tips and skills to successfully integrate life with work and be a team player.

“As far as a good team player goes, if you look at sports, [music] bands, the government, or your own industry there are a few characteristics that come to mind,” Sepahban said.

“The top one is a commitment that has to be displayed in a shared objective – what’s really best for the team. Regardless of which area you’re in, it’s proven that a team that’s effective is what makes an organization. No one individual can carry the day — it starts with commitment.”

“There has to be trust… Sometimes people trust but are a little bit unsure; they don’t put everything on the table.  So even though there may be trust it takes away from the effectiveness of a team.”

“There has to be open, transparent communication…

“I’ve learned the hard way that communication is contextual.  Always saying what’s on your mind is not necessarily effective communication. But if you are committed to the team, to mutual respect, in order to solve problems, that can be a guide. Is it really helpful to the team or just getting it off my chest? Sometimes communicate privately and they can better hear you.
4. Mutual respect

“Sometimes you have the first three, but if people don’t display mutual respect in their dealings with each other, then the team can suffer.”

“Any team, any organization, any endeavor, is like life itself with ups and downs. There are bound to be issues of disagreement. But again commitment to the same objectives –we all trust each other while communicating openly with mutual respect –helps problem solving.”

Sepahban says embracing what she called “the sharing economy” helps with the successful integration of work and life.

“As a woman, we’re used to taking it all on, but when we think about what we need to get done at home and at work, sharing responsibility means a level of letting go you have to get comfortable with,” she said.

A single mother for a large portion of her working life, Sepahban said she made sure to prioritize what was going on at work and at home.

“It was important to ask my mother and my son,” she said.

Sephaban’s son is now a Cornell University graduate and her mother, now 78, successfully integrated family life and her work as an artist around the world.

Ten years ago, when Faye, Sepahban’s mother, embarked on writing her book, “One World Portraits of Diversity,” she asked for her daughter’s help.

“I became her project partner and we went out looking for the right publisher,” Sepahban said.

“Last September, we had the book launch.  But it took work to get there–publisher, marketing, handling the proceeds. I invited my boss to come to the event.”

Unbeknownst to Sepahban, there was a corporate event the same weekend and her boss had planned to take her along.

“It was quite an honor,” she said. But my priority was to launch the book and so I shared that with my boss,” she said.

He wondered how she had found time to do all that.

“I had to make some priority calls,” Sepahban said. “My work didn’t suffer, apparently I made the right ones.”