Space Telescope ‘represents a historic moment for America and humanity’ 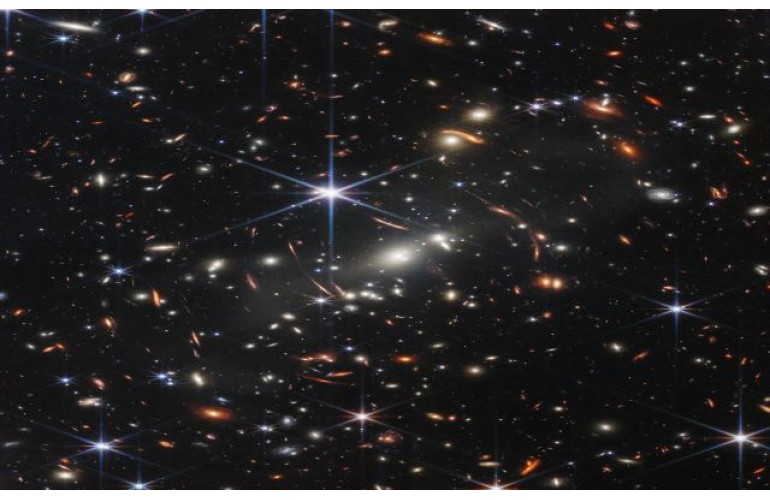 The White House announced Monday, July 11, that the Biden Administration has made public the first full-color image from the Webb Space Telescope, which captured the highest-resolution images of the infrared universe in history.

According to the press release, the Webb Space Telescope is a program led by the National Aeronautics and Space Administration (NASA), an independent agency of the U.S. federal government, along with its partners, ESA (European Space Agency) and the Canadian Space Agency.

On Facebook, President Joe Biden wrote: “The first image from the Webb Space Telescope represents a historic moment for science and technology. For astronomy and space exploration. And for America and all humanity.”

The image was previewed to President Biden and Vice President Harris during a briefing at the White House by officials from NASA, where they discussed how these revolutionary images will enable breakthroughs in nearly every branch of astronomy. The telescope is one of humanity’s great engineering feats, launching from Earth on a rocket, and then unfolding itself in space. Thousands of engineers and hundreds of scientists worked to make the telescope a reality, along with over 300 universities, organizations, and companies from 29 U.S. states and 14 countries.

According to the White House, the Webb Space Telescope launched from French Guiana in December 2021 and is now orbiting the Sun one million miles away from Earth.

The revolutionary technology will study every phase of cosmic history over the past 13.5 billion years — from inside our solar system to the most distant observable galaxies in the early universe, the press release said. The telescope gives us the capacity to explore a wide range of questions that help us understand the origins of the universe and our place within it.

During the briefing, President Biden publicly showed the first of the images: “Webb’s First Deep Field,” the “deepest” and sharpest infrared image of the distant universe ever produced. This image is filled with galaxies, some more than 13 billion years old, which means they formed just after the Big Bang. Over the coming days, NASA will publish additional images, which reveal details about the atmosphere of an exoplanet outside our solar system, “stellar nurseries” where stars form, galaxies that interact and trigger star formation and black holes, and a glimpse into how stars die.

The images from the Webb Space Telescope illustrate the great leaps in science and technology discovery that can be made with U.S. government leadership, in partnership with other countries. Continuing, the press release said that the Biden-Harris Administration has worked to restore scientific integrity to Federal policy-making and to more broadly and equitably engage and serve Americans around science and technology solutions, including addressing great challenges like pandemics, cancer, and the climate crisis, and ensuring America remains the world leader in technologies and industries of the future that will be critical to our economic prosperity and national security.