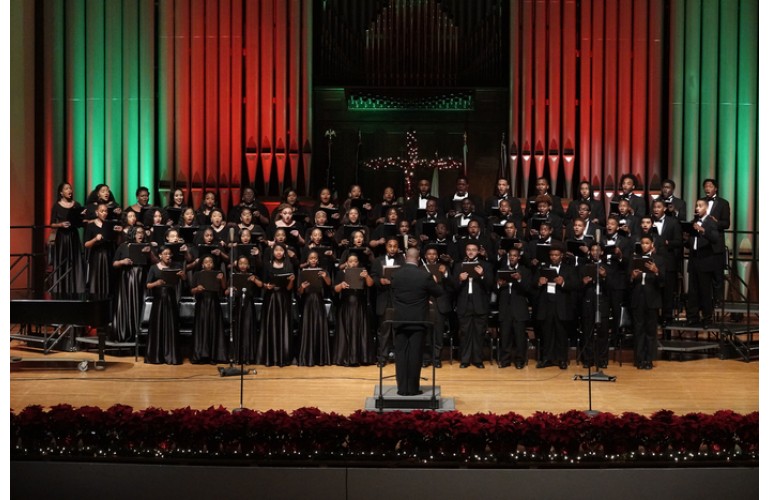 A video from the annual Spelman-Morehouse Christmas Carol Concert series, which was streamed in early December, is now available to view on YouTube. According to the statement, more than 100 talented choral students from Glee Club choirs performed holiday music, a variety of carols, including the hymn “Glory to God,” arranged by Kevin Johnson, who is in his 21st year as director of the Spelman Glee Club;  Morehouse’s rendition of “Betelehemu” and Spelman’s “We Are Christmas.”

The Christmas Carol Concert began in December 1927 and was developed by Florence M. Read, former Spelman president, and John Hope, then president of Morehouse. The first concert was held in Spelman’s Sisters Chapel, and the tradition grew as crowds grew, with the concert becoming a three-night affair. When Morehouse’s King Chapel was built in 1978, the concert partially moved into the larger venue.

“The annual Spelman and Morehouse Christmas Carol Concert marks the official entry into the holiday season here at Spelman and throughout the metro Atlanta community,” said Mary Schmidt Campbell, Ph.D., president of Spelman. “Each year, this joyous occasion affords our students and faculty the opportunity to showcase their talents in celebration of the unforgettable music of the season. The Christmas Carol Concert is a gift we all look forward to giving every year.”

For the last 41-years, the colleges have maintained the tradition of ushering in the holiday by performing two nights at Morehouse and one at Spelman.

“Excellence abounds at the Atlanta University Center,” said David A. Thomas, Ph.D., president of Morehouse. “The annual Christmas Carol Concert shows the musical mastery that students at Morehouse and Spelman possess. The concert has attracted thousands of people over the years. It is our gift to Atlanta to show our appreciation for the city and its residents who visit our colleges and support our programs.”

The Morehouse Glee Club also offered modern takes on the carols “Have Yourself a Merry Little Christmas” by Brittney Boykin and “Angles Have We Heard on High” by Stanley Thurston, among other songs.

Morehouse Glee Club Director David Morrow ’80, a former Glee Club member, said updating traditional holiday pieces with new melodies is one of the hallmarks of the concerts. Morrow has been performing in or directing the Choral Concert for 33 years.

“I enjoy working with our talented young singers to create some wonderful music and Christmas cheer for our friends in the Atlanta community and beyond,” Morrow said. “It is a wonderful holiday tradition with a variety of music that everyone will enjoy.”

Tuskegee University rang in the holidays on Dec. 8 as part of its Christmas Concert and Tree-Lighting Ceremony. The concert featured the Tuskegee University Golden Voices Concert Choir, which is under the direction of Dr. Wayne A. Barr, the university’s director of choral activities, and accompanist Brenda Shuford.

“The Christmas concert is always a highlight of our experience as a choir — for so many reasons,” Barr noted of the university’s long-standing holiday concert tradition. “It ushers in the Christmas season and allows the university to share the sacredness of this time of year with our surrounding communities.”

The Tuskegee Brass Ensemble, directed by John Q. Lennard, the Women’s Glee Club and the Men’s Glee Club joined the choir as they performed well-known classical and traditional holiday songs. This year featured work is the Vivaldi Gloria, which will be accompanied by an orchestra.