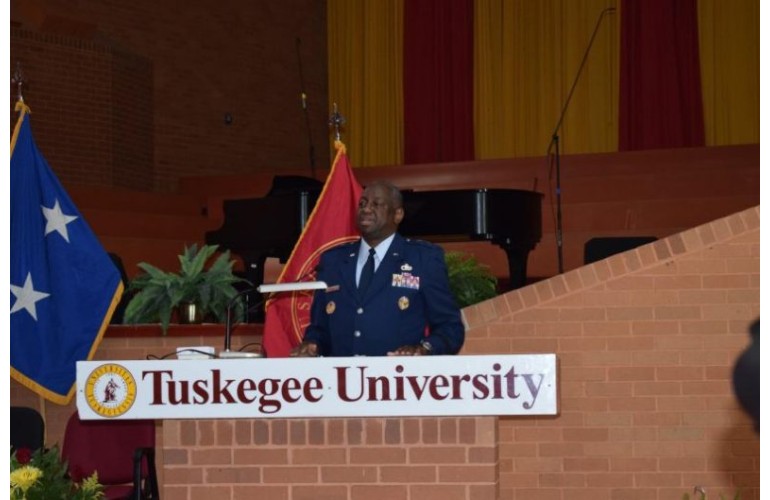 Among the commisioning officers administering the ceremony was Major General Mark Brown (standing left and at the dais above).

A Tuskegee alumnus, the general was commissioned through the ROTC program and entered active duty in 1986.

Gen Brown will retire in June 2018 as Vice Commander, Air Education, and Training Command, which trains more than 293,000 Airmen per year and 62,000 active-duty, Reserve, Guard, civilian and contractor personnel.

Earlier this spring, Smith joined students and faculty, as well as Boeing scientists and business leaders, at the Radio Aero Modelers of Montgomery Airfield to witness the annual fly-off. This was the first one to be hosted by Tuskegee University.

“Performing new fiberglass techniques and solving problems regarding weight were certainly challenges — I hadn’t tried those before,”Smith said. “But, bringing a concept to life, working through those challenges and seeing that concept take flight was exciting.”

Through the Aerospace Partners for the Advancement of Collaborative Engineering (or AerosPACE), Boeing provides funding for materials that students need to design and build the Unmanned Aerial Systems (UAS), along with access to industry-standard software and Boeing subject specialists.

In a recent interview with Alabama Department of Commerce’s Made in Alabama website, Dr. Javed Khan, professor and head of Tuskegee’s Department of Aerospace Science Engineering since 2000, said aerospace science engineering grads are contributing “substantially to the workforce and to the diversity of it.”

“Our graduates are working at all the big aerospace companies, and there are also many graduates who go into the military, NASA, the FAA and other agencies,” Khan said.

Since Tuskegee’s Aerospace Science Engineering Department started in 1983, it has produced more than 200 graduates.

“There was a time when we used to graduate five or six a year. This 2017 academic year, the department graduated 21 African-American aerospace engineers,” Khan told Made in Alabama.

Tuskegee has also produced more African-American flag officers than any other college or university in America.