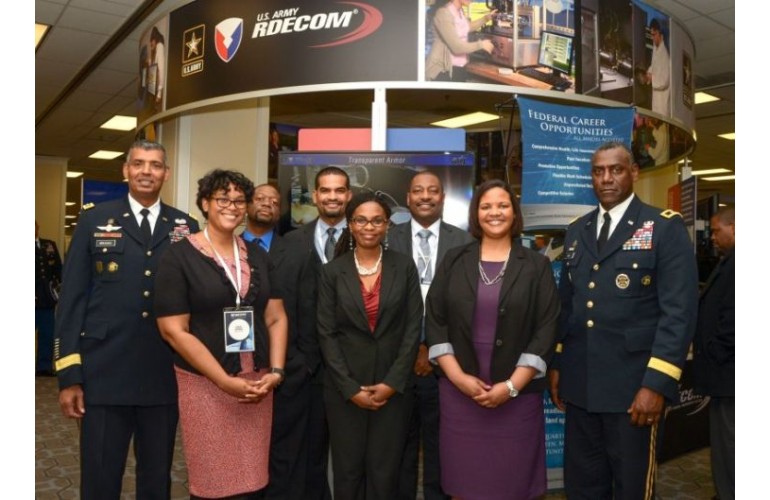 “I’m honored to have been selected as this year’s Army recipient of the Stars and Stripes Award,” said Wins, who has more than 25 years of service.

The award recognized Wins, from Virginia, as an officer who made a distinguished contribution to the scientific and research development mission. The conference selects an award winner from each military branch each year.

Wins and dozens of high-ranking military officers and civilians also had the opportunity to spend time talking to 200 pre-college, minority youths about choosing educational paths in science, technology, engineering and mathematics (STEM).

This mentoring session was one of the highlights of the whole event, according to Wins.

“It’s a great opportunity to spend some time talking to our youth, primarily our minority youth in the D.C. area,” he explained.

Wins’ message to the youngsters is that opportunities are at hand.

“STEM areas of study are not the easiest topics in the world in which to major, but they are hugely important,” said Wins, who graduated from the Virginia Military Institute. “They teach you how to think logically; how to problem solve. And with some hard work, and the right study skills and habits, you can make it through.”

The U.S. Army Research, Development and Engineering Command (RDECOM) has the mission to provide research, development, and engineering to produce capabilities for decisive overmatch to the Army against the complexities of the current and future operating environments in support of the Joint Warfighter and the Nation. RDECOM is a major subordinate command of the U.S. Army Materiel Command.