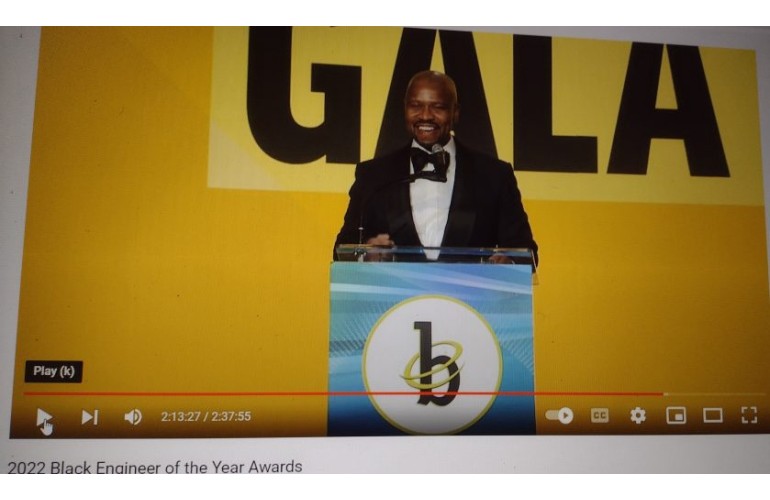 Johnson, currently the executive vice president for global manufacturing and sustainability at General Motors (GM), said he has spoken to hundreds of college students over the past year.

“Some were on the verge of graduation; some were just starting their academic careers,” Johnson said in a video clip. “But the message was the same. There’s never been a more critical time to have diverse voices in science, technology, engineering, and math (STEM). It is the pipeline to our future, one offering influential and lucrative careers.”

Many of those careers are included in a roster of 8,000 jobs GM is hiring for in STEM areas. Johnson said over 1,500 of those jobs are in manufacturing and related areas.

“The demand for engineering talent is as strong as I’ve seen in my forty-year career,” Johnson said. “And the simple truth is we don’t have enough people of color in any of those disciplines.”

As the 2021 Black Engineer of the Year, Johnson said he was grateful for the opportunity to speak to the next generation of leaders and innovators.

“Tonight, as I pass the torch to Ted Colbert, the 2022 Black Engineer of the Year, I hope you will find the dialog with students as enlightening as I have. Unlimited opportunities are waiting, as your options have shown the way.”

On stage at the BEYA Gala this weekend, David L. Calhoun, president and CEO of The Boeing Company, praised Theodore “Ted” Colbert III, chief executive of Boeing Global Services at the Boeing Company, for being honored with the Black Engineer of the Year Award’s highest accolade.

Calhoun described Colbert as a “changemaker and a visionary” within the Boeing Company.

Throughout his career, Calhoun said that Colbert had taken every opportunity to develop skills in engineering and leadership.

Calhoun added that as president and CEO of global services, Colbert leads professionals in more than seventy countries, a challenging assignment at a difficult time.

In a short video featuring Colbert’s friends, family, and colleagues, Dr. David Thomas, president of Morehouse College, said Colbert had been instrumental in establishing the Boeing Internship Program that supplies scholarships to students from historically Black colleges and universities.

“He not only brought his charisma to it, but he also brought his personal experience as a college student, “added Dr. Harry L. Williams, president and CEO of the Thurgood Marshall Fund, an organization that supports and represents nearly 300,000 students attending its 47 member-schools that include public historically Black colleges and universities (HBCUs), medical schools, and law schools.

In everything that he does, he does with the eye on how he can help those that are less fortunate, that have not been exposed to the things they need to be exposed to in the 21st century, especially in science, technology, engineering, and math (STEM) said Dr. Calvin Mackie, president and CEO of STEM NOLA, a national leader in the design and delivery of STEM-based activities, programs and events to K-12 students, families, and communities.

BEYA lifetime achievement winner Dr. John Tracy, who retired from Boeing in 2016, said the Black Engineer of the Award is “an honor given to people who have achieved the highest levels of engineering excellence, leadership, community service, and working to inspire the next generation of engineers.”

In another pre-recorded video clip featuring Colbert’s family, his mother, a retired social worker, said that her son exemplifies “the definition of an all-around good man.”

Taking the podium, the 2022 Black Engineer of the Year thanked Boeing, his family, and friends.

“I am simply overwhelmed by the support and humbled,” Colbert said in his acceptance speech, shortly after the award was presented by his godmother, Shirley Marcus-Buckner, a trustee at Morgan State University, a leading HBCU in Maryland.

Colbert thanked the community of people who have helped him along the way, starting with his parents, who gave him gifts that included a Commodore 64 (an 8-bit home computer introduced in January 1982), chemistry sets, metal toy construction sets, and a 1983 Subaru GL Wagon, that fired up his imagination as he grew up as a young Black man in Baltimore in the 1980s.

“My parents dropped me off at Morehouse to begin a five-year dual degree engineering at Georgia Tech,” Colbert continued. “I worked super hard during my freshman year and landed a full scholarship with AT&T Bell Laboratories.”

Colbert also talked about taking physics classes with his wife, and STEM partner, whom he first met almost thirty years ago at Clark Atlanta University. Mrs. Trista Colbert is currently vice president/senior partner in hybrid cloud management with IBM Federal Market. The couple has two sons who are full-time students at Morehouse College.

Colbert said he was proud to be part of the Boeing team that has shrunk distances on Earth and enabled the United States military and its allies worldwide.

“I’m proud of our enduring commitment to our culture, leveraging diversity, equity, and inclusion as a core value,” he said. “I and others have been free to unleash our voices and stories to improve the Black experience at Boeing,” Colbert said.

Colbert attended his very first BEYA Gala as a twenty-something professional and was inspired by the accomplished STEM leaders on stage.

“In the book 20 Years at the Top: A Generation of Black Engineers, the CCG [Career Communications Group] author describes these leaders as innovators who have made deep impressions on their peers and colleges,” Colbert said. “Everyone had an amazing story, and I thought,’what in the world will my story be?’ “

Colbert thanked all those who had served as mentors, coaches, and champions during his career; the staff and directors of the $15-billion Boeing Global Services unit, and the aerospace corporation’s CEO who had nominated him for the Black Engineer of the Award.

“This award is much bigger than me,” Colbert said in conclusion, “It’s about every awardee who has graced the stage, ever, and in particular, those who have graced the stage tonight and in the past couple of days. When I go to work on Monday, I will keep my business winning, so I can help more people walk across this stage, maybe a future Black engineer of the year.” Watch the ceremony here.