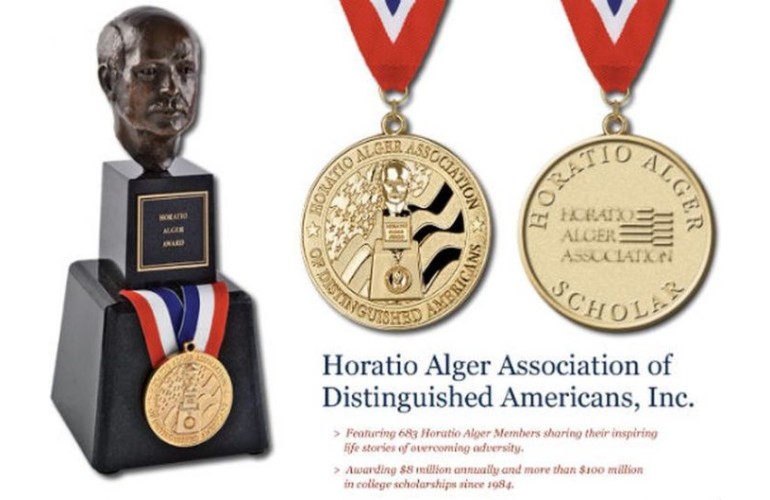 In 2016, the Horatio Alger Association of Distinguished Americans administered over $12 Million in scholarship funds for 1, 915 students.

Since 1984, more than $125 Million has been awarded in scholarships at 1,024 colleges and universities attended by scholars. The association has 8, 105 alumni. USBE‘s Jamie Lynn Harris met one of them

Luis Alberto Febres, the first Puerto African ever to win the Horatio Alger Association Scholarship, back in 1991, has exemplified the type of drive the award celebrates throughout his life.

In Puerto Rico, growing up in poverty meant that both of Luis’s parents were illiterate. His father worked as a laborer on a sugarcane plantation, while his mother was the homemaker. Despite his parents’ backbreaking work, finances were very tight.

“There were times where we didn’t have anything to eat,” he remembers.

Both his father and mother understood the importance of education and the opportunities that it would afford their four children.

“They were obsessed with the idea that [their] children were not only going to finish high school but also go to college.”

And Luis and his three siblings did just that.

It was during his first year at the University of Puerto Rico that he committed to joining the military. It had always been a dream of his. He grew up with an 8×10 photo of his closest cousin in his green military uniform on the mantel in the living room. Luis looked up to him and what that uniform represented: determination.

In 1992 he joined the U.S. Army National Guard and did his combat training at Ft. Sill, Oklahoma, and his Advanced Individual Training at Ft. Lee in Virginia. In 1994 Luis graduated with honors from the Air Force Security Academy. He then studied Air Base Ground Defense at Ft. Dix in New Jersey.

From there, Luis served in a variety of positions in law enforcement, security, and anti-terrorism, where he held the title of Physical Security Engineer. He focused on how structures and facilities need to be built to withstand a terrorist attack and determined the types of walls and windows needed for containing a threat at a military base. He was also responsible for developing building layouts.

As he gained more experience in this highly specialized engineering focus, he transitioned to developing army base protocol for terrorist threats and becoming program manager for crime awareness initiatives on base.

After he left the army, Luis became an International Security and Logistics Manager at Mitsubishi Hitachi Power Systems, where he was responsible for developing and coordinating the safety and security of employees world wide. His job required him to not only consider security against active threats but to also monitor any epidemics in countries that Mitsubishi employees were visiting.

Currently, he is working as an engineer at Massey Services, a full-service home services company specializing in pest control, landscaping, and air conditioning. He awaits his final assignment for Homeland Security in Customs and expects to be starting this new opportunity by the end of the year.

“[The association] has given me lots of opportunities and been a positive influence,” he says. Luis continues to give back, returning every year since 2005 as a volunteer to support the association.

The Horatio Alger Association selects high school seniors from a pool of highly qualified applicants who have an outstanding GPA, have invested in their communities, and have faced great struggle, as exemplified by Horatio Alger Jr. himself.

Alger grew up poor in rural New England, eventually working his way through Harvard University and becoming a well-known author at the end of the 19th century.

The organization strives to provide opportunities for students that otherwise might not have been able to afford college. Not only does the organization award $25,000 but it also serves as a network for past scholars to continue as mentors.

The words of his mother have been guiding principles for Luis his entire life: “If you’re not going to give it your all, don’t do it.”

Her philosophy propelled him to succeed in school growing up, driving him to become a Horatio Alger Fellow and to being promoted up the ranks to Senior Master Sergeant in the Air Force.

Luis was taught to “conform to his own expectations” instead of falling prey to the drugs and gangs prevalent in their San Juan neighborhood. When he won the scholarship, multiple local news stations asked Luis to come in for interviews. His community was proud that someone from their neighborhood was driven to succeed against all odds.

He reflects on his mother’s upbringing as it relates to his own experience:

“There is a special type of power that women who grow up in those environments develop that’s difficult to put into words…nothing intimidates you…strong as iron inside. You know what it is to struggle. You got the scars to struggle.”

Members of the Horatio Alger Association of Distinguished Americans are part of a select group of Americans who have experienced a wide spectrum of what life can offer.

Similar to characters in stories by Horatio Alger, Jr., Association Members traditionally have started life in “humble” or economically challenging circumstances. In spite of this early adversity, or many would say because of it, they have worked with great diligence to achieve success and the fulfillment of their dreams.

Members represent all walks of American life and have made outstanding contributions in the fields of science, medicine, business, entertainment, athletics, law and jurisprudence, religion, education and the arts.

While their career paths are varied, members have the honor of being part of a unique group – they are individuals who have achieved the American dream. Association Members, through their experiences, are proof that it is real and that it is attainable.

To find out more about our Membership please visit the Association’s homepage at www.horatioalger.org