The Woman Behind GM’s Electric Volt 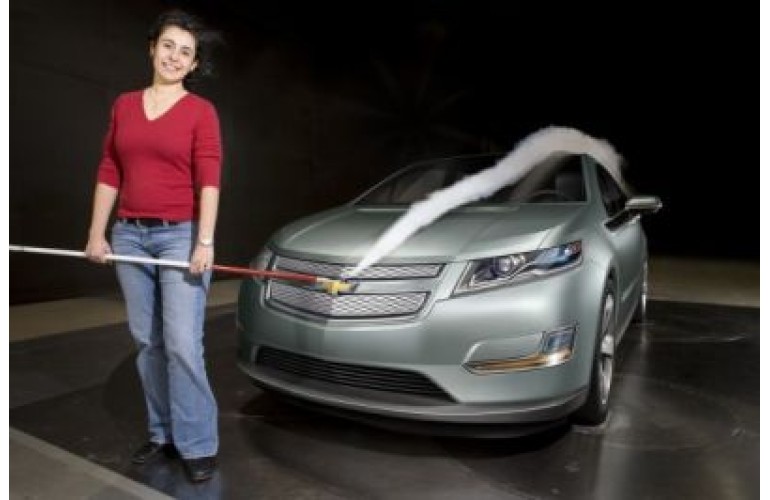 Chevrolet Volt Aerodynamicist Nina Tortosa worked with Volt designers to shape the car, making it one of the most aerodynamic vehicles GM has ever produced. Read excerpts from an interview Nina gave Women of Color magazine in the summer of 2010.

“Most people don’t understand the importance of aerodynamics,” says Nina. “Changing the vehicle design here and there can reduce drag, which then results in significantly better fuel economy 90 percent of drag comes from pressure drag. That means there is high pressure from the front of the vehicle and low pressure from the back.”

The difference creates a force that will hold the vehicle back.

Thanks to Nina’s hard work, the Volt represents a breakthrough in fuel economy–and not just for those who drive 40 miles a day or less.

The Volt can extend its range to more than 300 miles with its flex fuel-powered engine-generator. Just imagine no more mad rushes to the gas station between grocery and school runs. Plug your Volt in overnight and presto – it’s all charged and ready to go!M/p>

As the Volt’s performance engineer in aerodynamics, Nina spent her days in a wind tunnel. Her kids love to hear about her job, she says.

Currently, Nina is a supervisor and senior engineer of the GM Aero Lab – Wind Tunnels and Rolling Road.

On the Volt project, Nina worked with a whole studio of designers and engineers from around the globe and the result is one of the most eye-catching, eco-friendly cars of our time.

When not at work, Nina enjoys a variety of pursuits. She has a pilot’s license. She also windsurfs and speaks fluent Spanish and German.

Born in Barcelona, Spain, and raised in Minneapolis, Minnesota, Nina says she always knew she wanted to do something in the engineering field.

In fact, when she was an eight-year-old watching the first U.S. space shuttle launch on TV, she dreamed of becoming an astronaut. After attending two space camps, Nina went on to get both a bachelor’s and master’s degrees in aerospace engineering and mechanics at the University of Minnesota. A life-long passion for aerodynamics was born.

A new report says that electric car sales are expected to increase, reaching 55 percent of global new car sales by 2040 and replacing 7 percent of gas and diesel consumption.

The electric car has come a long way. Remember the EV1?

It was the battery electric vehicle that General Motors took off the road in 2003 because they could no longer supply parts to repair them.

One of the problems with electric vehicles was that you couldn’t have long-range, the cars ran only 126 miles between charges. Also, there was no widespread network of places you could recharge them. Worse, recharging wasn’t a 15-minute procedure like you would fill up a gas tank. It took many hours. The combination of all those things created major hurdles.

Fast forward to 2010. The first mass-produced vehicle to drive up to 40 miles on a single battery charge will hit the roadways this year.

The Chevrolet Volt is an electric car that can create its own electricity. Plug it in, let it charge overnight, and it’s ready to run on a pure electric charge for up to 40 miles ‘ gas and emissions-free. After that, Volt keeps going, even if you can’t plug it in. Volt uses a range-extending gas generator that produces enough energy to power it for hundreds of miles on a single tank of gas.

When GM engineers designed Volt, they wanted to find a battery range that would allow many people to drive gas-free much of the time. So they looked at the survey by the U.S. Bureau of Transportation Statistics and found that more than 75 percent of people commute 40 miles a day or less.

With that in mind, they developed Volt to meet most people’s basic driving needs while preserving their ability to drive on a pure electric charge most of the time. When the battery runs down, a standard gasoline-powered internal combustion engine will kick in.

Let’s assume you have a fully charged battery. Now, depending on the weather, the electrical features that are turned on and how you drive, you can drive up to 40 miles on the electricity stored in the battery, totally gas and emissions-free. After that, its gas-powered, range-extending generator automatically kicks in to provide electrical power. So Volt can go for several hundred additional miles until you can plug it in or fill it up again.

The highly anticipated electric Chevrolet Volt will hit the roadways later this year and will be the first mass-produced vehicle to drive up to 40 miles on a single battery charge, without using a drop of gasoline or producing emissions. Given that nearly 8 out of 10 Americans commute fewer than 40 miles a day –this is exciting news.