Tierra Range is a Chemistry Champion 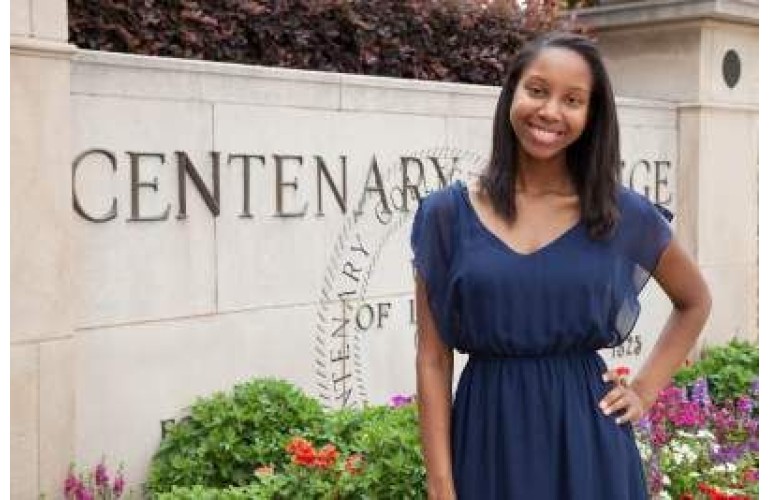 “Lots of people are doing amazing science, but few people know how to talk about it,” says Tierra Range, the Centenary College of Louisiana senior who took second place in the American Chemical Society ChemChamps competition.

Range’s journey to the 2015 ChemChamps finals began more than a year ago when she competed in the 2014 ChemChamps competition in San Francisco and finished as a semifinalist.

She was invited to participate again, and in spring 2015 began new preparations for the rigorous four-step competition.

The first two rounds required Range to produce original videos, including one explaining the element Tungsten for a high school audience.

She advanced to the second round as one of the official judges’ top four, and a video review panel assembled by the American Association of Chemistry Teachers gave the nod to the semifinal round of eight at the ACS headquarters in Washington, DC in June 2015.

Over two days in Washington, Range and the other semifinalists received intensive communications training designed to sharpen their slides-based presentation skills as well as introduce tips for stage performance and improv techniques.

On June 23, the semifinalists each had three minutes to present their original research before a live audience of ACS employees whose science backgrounds ranged from knowledge acquired in high school classes to chemistry Ph.Ds.

The presentations delivered in Washington for the semifinals were filmed and released on YouTube, with finalists gaining points based on the number of views between June 23 and August 17.

The votes from this audience sent Range and three other finalists to Boston in August for the fourth and final phase of the competition. The finalists had about seven weeks to prepare for the fourth round, which included voting in five categories.

In Boston, the finalists gave three live performances highlighting their research to three very different and distinct audiences: children and families at the Boston Museum of Science, professional chemists browsing the Expo at the 250th ACS National Meeting, and finally an open event pitched to a general audience that solicited votes from both onsite and live stream viewers.

A second set of votes on this final general performance came from three professional science communication judges, two of whom had viewed all of the preliminary portions of the competition.

“I was the youngest competitor to advance to the finals in Boston,” said Range. “At this point, everyone else was at least 25 years old, and either a graduate student or working in a research lab. One competitor even has his own YouTube channel and is in a band!”

When the points from all phases were tallied, Range was announced as the 2015 runner-up behind champ Hadi Fares, a graduate student at Florida State University. Range, who received a fellowship to attend ACS’s International Research Experience for Undergraduates (IREU) program at the University of Singapore in 2014, was also invited to become an IREU spokesperson to promote this opportunity to other undergraduates.

The ChemChamps experience has inspired Range to put her communications training to work in the future as a medical correspondent.

“The general public can’t benefit from science if they don’t understand it, and the ACS wants scientists to start early in educating the public in general science topics and keeping people involved in science, Range said. ”

“I learned so much about so many other people’s research as a result of being in the competition, and I think this has made me an even better science communicator,” said Range. “To have gone from making an initial video for my local TV station to being able to explain my research to kids is really amazing!”

Range is now applying to medical school and preparing to graduate from Centenary in December 2015.

With more than 161,000 members, The American Chemical Society is a nonprofit organization chartered by the U.S. Congress. ACS is the world’s largest scientific society and a global leader in providing access to chemistry-related research. Learn more about ACS and the ChemChamps competition at www.acs.org.