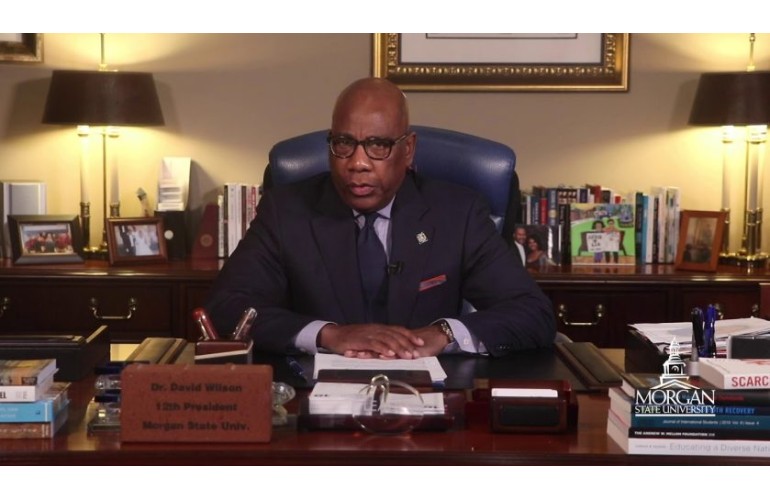 Wilson started the conversation this fall by talking about transformation. “We are now in the neighborhood of 9,000 students,” he said. “We have never had that many students in the 155-year history of the institution.”

According to Wilson, the largest historically Black college and university (HBCU) in Maryland enrolled 2,500 first-year students last year and expects to be in that same range in 2022, which is a 60 percent increase over the first-year students that Morgan State typically enrolls each year.

For the fall of 2022, Morgan State University will not only have its largest enrollment ever, but more of the new students are also from out of state. The new cohort represents thirty-eight states across the continental United States and about seventy countries.

No surprise then that new construction is taking on campus, with new residential facilities. The last hall of residence built at Morgan is 35 years old.

Before the fall semester, Morgan opened a ten-story, 670-bed residential facility. The Thurgood Marshall Hall is named after Thurgood Marshall, who was confirmed as the first Black Supreme Court justice on August 30, 1967.  Another 600-plus bed unit will open in the fall of 2024.

Wilson said students are attracted to Morgan because of the total academic experience that will enable them to be prepared for future work.
Morgan is one of the few universities in the U.S. offering a bachelor’s degree in mechatronics engineering. Other offerings include coastal science and policy, cloud and advanced computing, and social justice. Morgan also has one of the most diverse faculties in higher education, with 42 percent African America, 20 percent White, and 10 percent international.

Since Wilson became president, Morgan has moved from being classified as a moderate research institution to one with high research activity in 2018. Graduation rates, retention rates, and internships have also improved, winning the HBCU national awards in terms of institutional outcomes for the next ten years.