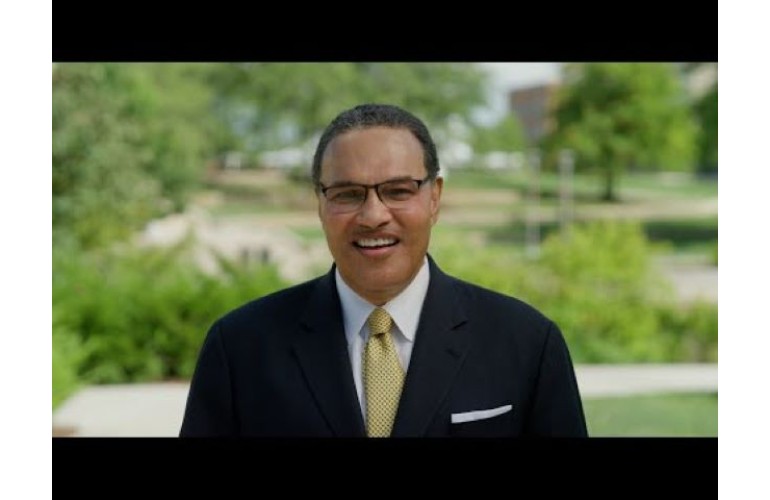 Freeman A. Hrabowski, Ph.D., president of the University of Maryland, Baltimore County (UMBC), announced his plans to retire at the end of this academic year. Dr. Hrabowski took office as UMBC’s president more than three decades ago. He has served as President of UMBC since 1992

Dr. Hrabowski’s research and publications focus on science and math education, emphasizing minority participation and performance. In 2013, he was named Black Engineer of the Year by the BEYA STEM Conference, which is hosted by US Black Engineer magazine and the Council of Engineering Deans at Historically Black Colleges and Universities.

Born in 1950 in Birmingham, Alabama, Hrabowski graduated from Hampton Institute (now Hampton University) with the highest honors in mathematics. He received his M.A. (mathematics) and Ph.D. (higher education administration/statistics) from the University of Illinois at Urbana-Champaign.

In a video posted on YouTube, Dr. Hrabowski said Wednesday: “For almost thirty years, I have been privileged to say, I am the president of UMBC. So today, I come to say, it’s time for me to retire, effective June 2022.”

He thanked students, faculty, and staff of UMBC, alumni, donors, partners, the Board of Visitors, and the entire University System of Maryland.

“From the chancellor to the Board of Regents,” he added. “And all of our colleagues at other institutions. Finally, the elected officials who have invested so much in this university. This is a state that believes in the importance of education and higher education.”

The longtime educator said that everybody marvels at the beauty of the UMBC campus, the grounds, and billion-dollar-plus buildings built in the past few decades.

“But more important than that, as is true with this state, as is true with UMBC, what matters? The people,” Dr. Hrabowski said. “I thank all of you for supporting Jackie and me over this period. I’ve been here at UMBC thirty-five years, as of next year, and forty-five years in public higher education in this state. It is the best place in the country to work. We have scholars from all over the world and students who are amazingly talented. In addition, we work with children in the communities.”

In 2021, UMBC boasts the largest freshman class than ever, more research, more efforts involved in society, and problem issues.

“We are prepared to continue to seek the truth and to prepare leaders for the next generation,” he said. “I challenge all of us to reflect on the brilliance of UMBC and what we mean to this country and beyond, and as we always say, success is never final. Keep hope alive.”

Dr. Hrawbowski chaired the National Academies committee that produced the 2011 report, Expanding Underrepresented Minority Participation: America’s Science and Technology Talent at the Crossroads. He was named in 2012 by President Obama to chair the President’s Advisory Commission on Educational Excellence for African Americans. His 2013 TED talk highlights the “Four Pillars of College Success in Science.”

In 2008, he was named one of America’s Best Leaders by U.S. News & World Report, which ranked UMBC the nation’s #1 “Up and Coming” university for six years (2009-14). For the past five years (2015-19), U.S. News ranked UMBC in the top ten on a list of the nation’s “most innovative” national universities. For the past ten years, U.S. News also consistently ranked UMBC among the nation’s leading institutions for “Best Undergraduate Teaching.” In addition, TIME magazine named him one of America’s 10 Best College Presidents in 2009 and one of the “100 Most Influential People in the World” in 2012. In 2011, he received the TIAA-CREF Theodore M. Hesburgh Award for Leadership Excellence and the Carnegie Corporation of New York’s Academic Leadership Award, recognized by many as the nation’s highest award among higher education leaders. Also, in 2011, he was named one of seven Top American Leaders by The Washington Post and the Harvard Kennedy School’s Center for Public Leadership. In 2012, he received the Heinz Award for his contributions to improving the “Human Condition.” In addition, he was among the inaugural inductees into the U.S. News & World Report STEM Solutions Leadership Hall of Fame. More recently, he received the American Council on Education’s Lifetime Achievement Award (2018) and was named a recipient of the University of California, Berkeley’s Clark Kerr Award (2019).

He serves as a consultant to the National Science Foundation, the National Institutes of Health, the National Academies, and universities and school systems nationally. He also serves on the Alfred P. Sloan Foundation boards, France-Merrick Foundation, Marguerite Casey Foundation (Chair), T. Rowe Price Group, The Urban Institute, McCormick & Company, and the Baltimore Equitable Society. In addition, he served previously on the boards of the Carnegie Foundation for the Advancement of Teaching and the Maryland Humanities Council (member and Chair).

Examples of other honors include election to the American Academy of Arts & Sciences and the American Philosophical Society; receiving the prestigious McGraw Prize in Education, the U.S. Presidential Award for Excellence in Science, Mathematics, and Engineering Mentoring, the Columbia University Teachers College Medal for Distinguished Service, the GE African American Forum ICON Lifetime Achievement Award, the American Educational Research Association’s Distinguished Public Service Award, and the American Association for the Advancement of Science’s (AAAS) William D. Carey Award; being named a Fellow of the AAAS, Educator of the Year by the World Affairs Council of Washington, DC, and Marylander of the Year by the editors of the Baltimore Sun; and being listed among Fast Company magazine’s first Fast 50 Champions of Innovation in business and technology, and receiving the Technology Council of Maryland’s Lifetime Achievement Award. He also holds honorary degrees from more than 40 institutions – from Harvard, Princeton, and Duke to the University of Michigan, the University of North Carolina at Chapel Hill, Johns Hopkins University, Georgetown University, Haverford College, and Harvey Mudd College.

With philanthropist Robert Meyerhoff, he co-founded the Meyerhoff Scholars Program in 1988. The program is open to all high-achieving students committed to pursuing advanced degrees and research careers in science and engineering and advancing underrepresented minorities in these fields. The program is recognized as a national model. Based on program outcomes, Hrabowski has authored numerous articles and co-authored two books, Beating the Odds and Overcoming the Odds (Oxford University Press), focusing on parenting and high-achieving African American males and females in science. His 2015 book, Holding Fast to Dreams: Empowering Youth from the Civil Rights Crusade to STEM Achievement (Beacon Press), describes the events and experiences that played a central role in his development as an educator and leader. The Empowered University: Shared Leadership, Culture Change, and Academic Success (Johns Hopkins University Press), which he completed in 2019 with two colleagues, examines how university communities support academic success by cultivating an empowering institutional culture.

A child-leader in the Civil Rights Movement, Hrabowski was prominently featured in Spike Lee’s 1997 documentary, Four Little Girls, on the racially motivated bombing in 1963 of Birmingham’s Sixteenth Street Baptist Church.