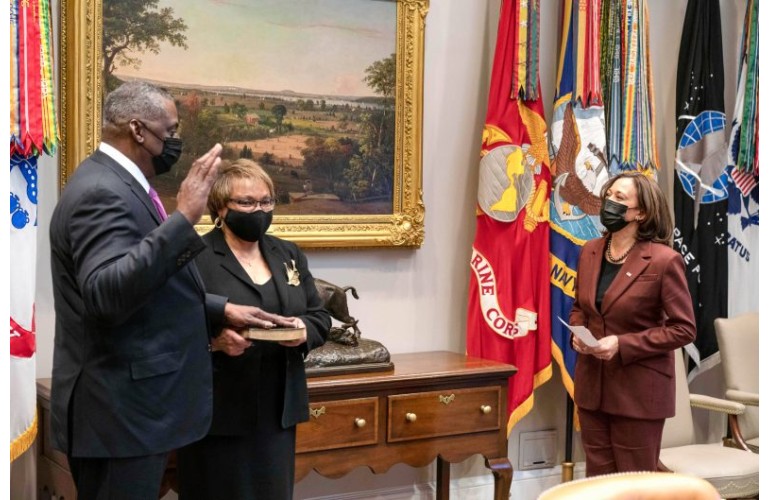 Vice President Kamala Harris announced on Facebook on Monday that she has sworn in the new defense secretary. Last week, Secretary of Defense Lloyd J. Austin III took part in a brief administrative swearing-in ceremony at the Pentagon shortly after the Senate confirmed President Joe Biden’s nominee. The vote was 93-2.

“Today I swore in Lloyd Austin as the Secretary of the U.S. Department of Defense (DoD),” Vice President Harris wrote on her wall. “Secretary Austin’s integrity, experience, and intimate knowledge of the issues facing our military make him the right leader for this moment.”

Austin and his wife, Charlene Denise Banner Austin, pictured alongside him in the vice president’s photo, have been married for over 40 years.

“Great a first black Defense Secretary sworn in by the first woman, woman of color Vice President. Lots of glass ceilings shattered,” wrote one member of the public.

Lloyd J. Austin III is a retired four-star U.S. Army general with nearly 41 years of military service. He was featured on the cover of US Black Engineer magazine’s end-of-year Veterans edition in 2013 and is a Stars and Stripes honoree.

During his illustrious military career, Gen. Austin served as the 33rd Vice Chief of Staff of the Army. His awards and decorations include five Defense Distinguished Service Medals, the Silver Star, and the Legion of Merit.

“This is a noteworthy tribute to General Austin,” said retired Vice Admiral Walter Davis, one of the founding fathers of the BEYA Stars and Stripes Mentoring organization.