Dr. Wendy Okolo: The Most Promising Engineer in Government 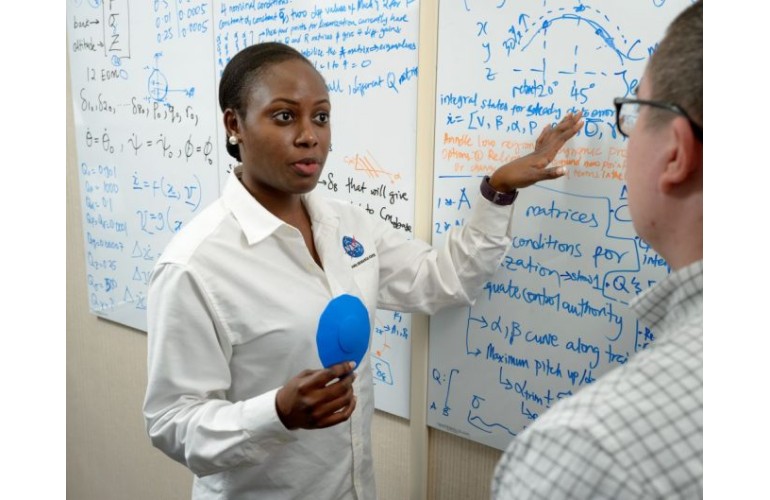 Dr. Wendy Okolo’s career has taken flight at the National Aeronautics and Space Administration (NASA), the U.S. agency responsible for the civilian space program, as well as aeronautics and aerospace research.

She will receive Black Engineer’s Most Promising Engineer in Government Award this weekend at the BEYA STEM Conference in Washington D. C.

Okolo is an aerospace research engineer at the Ames Research Center, a major NASA research center in California’s Silicon Valley.

She is working on the System-Wide Safety (SWS) project, and a Space Technology Mission Directorate Early Career Initiative (STMD-ECI) project at the Ames Research Center.

For the SWS project, she led the task of predicting GPS faults in unmanned aerial systems commonly known as drones.

Okolo worked with Langley Research Center in Virginia to investigate flight data and facilitate data exchange across and within NASA centers.

On the STMD-ECI project, she leads the controls team to develop unconventional control techniques for deployable vehicles, to enable precision landing and improve maneuverability during the entry, descent, and landing phases of spaceflight.

The STMD-ECI project is a $2.5 million-dollar project that she proposed and won as part of a six-member early- career scientist team.

Well done, Wendy! We are proud of you! Nigeria is proud of you, so is Mama Africa.
– https://oldnaija.com

Good news about Nigerians makes Nigeria a unique country, with a unique destiny.

WENDY….IS INDEED AN INSPIRATION TO NIGERIA…BUT DOES THE GOVERNMENT SEE THIS…..THE POTENTIAL OF NIGERIANS THAT THEY TREAT ROUGHSHOD….AND THESE SAME NIGERIANS ARE THRIVING IN ADVANCED COUNTRIES LIKE AMERICA…..WHEN WILL THE GOVERNMENT WAKE UP….WENDY IS ADDING TO AMERICA’S TECHNOLOGICAL DEVELOPMENT WHAT SHE COULD HAVE ADDED TO NIGERIA!!!!!!