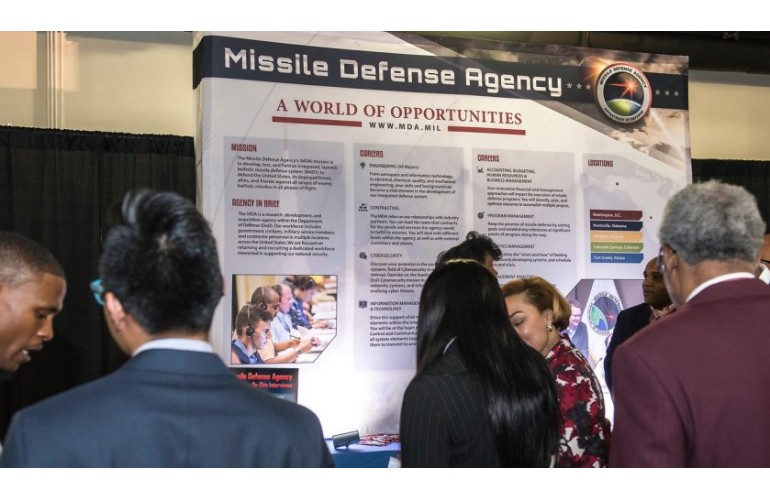 One of the busiest booths at the BEYA STEM Career Fair in February was the Missile Defense Agency stand. During the three-day science, technology, engineering, and math (STEM) event,  hiring managers interviewed hundreds of STEM students ready to use their talents to contribute to a safer future for America and the world.

Alex Richards is a director for test policy and controls at the Missile Defense Agency. He won the 2019 Outstanding Technical Contribution in Government award at the BEYA STEM Conference. Richards oversees the execution of policy development, contracting and acquisition for the agency’s Directorate for Test.

After earning both his bachelor’s and master’s degrees in electrical engineering from the University of Alabama, he started a career in the manufacturing world before moving on to federal government service. Richards is recognized for innovation and mentoring young, minority engineers in the Missile Defense Career Development Program.

LaAndrea Seay spent time doing rotational assignments in the three-year program as she climbed the career ladder. Currently, she is responsible for test data collection, test instrumentation, test analysis, and other test support for the Ballistic Missile Defense System flight testing. She won the Most Promising Engineer award at the 2018 BEYA STEM Conference. LaAndrea earned a bachelor’s in chemical engineering from Tuskegee University, followed by a master’s in material science and engineering from the University of Alabama. She joined the Missile Defense Agency in 2012.

Another recent BEYA winner from the Missile Defense Agency is Jacqueline Martin, a laboratory operation lead in the Advanced Research Center. Martin won the 2018  General Johnnie E. Wilson Legacy award for her contributions to over 300 tests in fielding a ballistic missile defense system to defend the United States, its deployed forces, allies, and friends against all enemy ballistic missile.

The Missile Defense Agency (MDA) recently announced that it is assembling a team of professionals to develop and deploy one of the most advanced technological undertakings since the U.S. moon landing.