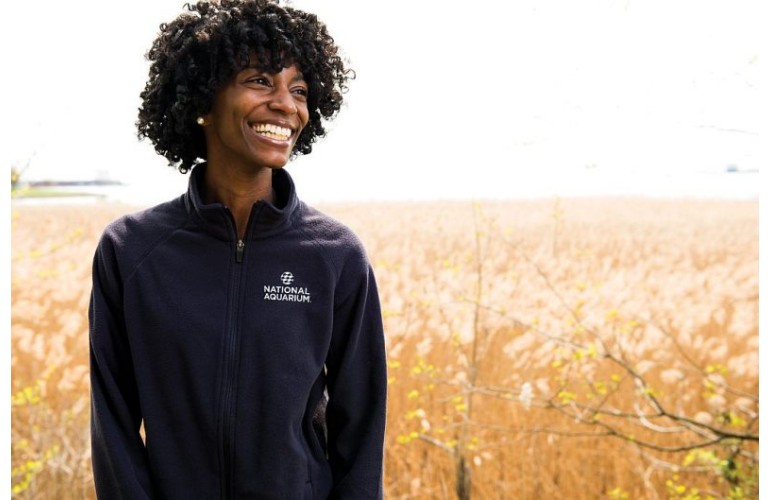 Discovery Channel has kicked off the start of its annual Shark Week Sunday, which will air Aug. 9 to Aug. 16. Several weeks ago, CCG Media caught up with Symone Johnson, who helped develop a conservation plan for sand tiger sharks in the Delaware Bay.

Born and raised in Baltimore, Symone grew up in Cherry Hill. In an interview with Ray Kennedy of CCG Media she said that as a little girl, she played often in Middle Branch Park, but wasn’t aware that a nearby river led to the Chesapeake Bay.

“Green spaces have evolved,” she said. “But there wasn’t really a whole lot to do except rolling down the hill.”

At some point she started watching animal shows on Saturday mornings and began noticing the bugs and birds in her neighborhood. During high school, she volunteered at the National Aquarium as an exhibit guide. Her job involved talking to people about what they were seeing, and that role inspired her to become a marine scientist.

“A lot of people come to the Aquarium for entertainment,” she said. “But they also come to learn.”

She encouraged young people living in urban areas to visit zoos, aquariums, and green spaces. “Explore your backyard, explore your block. You can use an app called i Naturalist to learn about the biodiversity in cities, including birds, insects, etc.”

She also advised that it’s good to seek out experiences early because she didn’t sail on a boat until she was an undergraduate student at Hampton University. One of her role models at college was Dr. Deirdre Gibson who motivated to do more than her best.

“The Marine Science Department was very small, and it probably had about fifteen students,” she recalled. “It was nice that it was so small because we were able to help one another so much.”

Symone also said there are now more Black people in the environmental space now. “There are people in so many different disciplines, which speaks to the power of diversity. They are committed to learning more about this world and the Earth,” she said.

She advised budding scientists to hold on to their plans and dreams.

As a young girl, she “didn’t know anyone who was Black and a marine biologist. Today, there are so many resources to find out about off the beaten track science careers, such as Web interviews, nature centers, aquariums, zoos, and the power of networking.

“Most of my opportunities have come because of networking, volunteering as a high school student, and paid internships,” she said.

The ocean is her favorite place. It’s where she finds the most peace. “It’s calming, just to look at a body of water and feel relaxed. We still don’t know 95 percent of the ocean,” she said.

Symone now leads the What Lives in the Harbor program at the National Aquarium, providing a meaningful watershed educational experience for all of Baltimore City’s Public Schools’ sixth graders. During this program, students take water quality samples and learn about how human actions impact the Baltimore Harbor and Chesapeake Bay and how they can reduce those impacts creating a more suitable habitat for species.

She has also introduced a new internship within this program between the Aquarium and local colleges and universities in Baltimore including Morgan State University, Coppin State University, and Towson University. Additionally in her role at the National Aquarium, Symone oversees a program for Baltimore City high school students called the Henry Hall Fellowship, a four-year rigorous, year-long program designed to honor and extend the legacy of engineer, world traveler, aquarist and philanthropist, Henry Hall (1896-1979). The program aims to mentor and foster the next generation of Baltimore City’s leaders and change makers through opportunities to:

· Develop a deep understanding of the principles of Urban Conservation and Environmental Justice and how those concepts influence and effect Baltimore City and the health of its residents.

· Learn, practice and hone the leadership skills needed to influence social and political leadership and effect meaningful change, today and in the future.

Symone also hosts a monthly online web-based educator video resource called NOAA Ocean Today, Every Full Moon (https://oceantoday.noaa.gov/deeperdive/). This resource is designed to be used by informal and formal educators, and the public, to share fascinating aspects of the ocean.

On her web page hosted on the National Oceanic and Atmospheric Administration (NOAA) website, Symone is listed as an alumna of the Educational Partnership Program (EPP) and a 2016 Knauss Marine Policy Fellow.

The EPP provides scholarships and internships to outstanding students studying at minority-serving institutions (MSIs). Scholarships provide funds for two years of study to rising junior undergraduate students majoring in science, technology, engineering, and mathematics (STEM) fields that support NOAA’s mission. Participants conduct research at a NOAA facility during two paid summer internships. Since 2001, over 186 students have completed the program and over 75% go on to graduate school.

According to NOAA, Symone completed two internships at NOAA facilities. The last internship under this scholarship program sparked her interest in sharks, so she attended Delaware State University for graduate school studying Sand Tiger sharks in Delaware Bay.

During her graduate work, Symone developed a conservation plan for sand tiger sharks in the Delaware Bay, which focused on using the best available scientific data to develop policy guidelines for managers, including Delaware National Estuarine Research Reserve staff and other federal agencies. Her project was part of the Social Policy focus area of the NOAA Environmental Cooperative Science Center.

The Department of Natural Resources and Environmental Control (DNREC) says although sand tiger sharks are one of the top predators in Delaware Bay, they are a protected species. The sand tiger shark frequents shorelines and sandy beaches, but they feed primarily on small fishes, eels, skates, and rays. Unlike other sharks, the sand tiger shark can gulp air from the surface, allowing it to be suspended in the water column with minimal effort.

As a 2016 Sea Grant Knauss Marine Policy Fellow, Symone was provided with a unique educational experience in line with her interest in ocean resources and in the national policy decisions affecting those resources. The Knauss Fellowship, which is named after former NOAA administrator John A. Knauss, is sponsored by NOAA, and matches graduate students with associations/institutions located in the Washington, D.C.. Symone worked in the NOAA Office of Education.